This is for dad - Cousins ... Humble Lion star stays strong after father's death 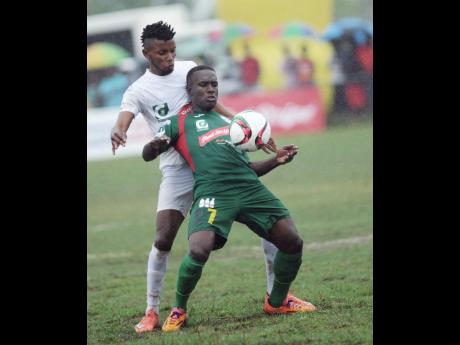 Sunday April 10, 2016 is a day that will be etched in the memory of seven-time capped midfielder Ricardo Cousins.

The player, who impressed with his quality as a schoolboy at Glenmuir High School was having one of his better days in recent memory. He had just scored the opening goal in his team's 2-1 win over 'League' champions and his former club Portmore United in their first leg semi-final of the Red Stripe Premier League.

It was wonderful time for him and the 'poorer' of the two 'Clarendon' clubs in the Red Stripe Premier League, Humble Lion(s). They had one foot in the final of the knock out stage of the competition, a first for them and their dream of going all the way was alive. Cousins was doubly happy, not just because of the major role he had played in the victory but also because his biggest fan and the one person who had been present at all his local games from schoolboy level upwards, was there to witness it. Things could not be better. So he thought.

After all, he had left him, his father Conrad Cousins, at home taking a shower in preparation to attend the match and had no reason to believe that he was not present. He always was.

"Normally at the matches I would glimpse him in the crowd but it was a big, big crowd so I didn't see him and did not think anything of it," explained the 28 year-old.

When he got home cousins expected to see his father at home and he did.

He Continued, "I touched him in the head twice and said to him, 'how yuh tired so like is you play the match?' but I did not get a response. I then realised that something was wrong."

Naturally, the realisation shocked him but Cousins, the only member of his immediate family still residing in Jamaica and who shared house with his 52 year-old father, said he had to gather himself and handle the situation.

"I still can't describe the feeling that went through me when I realised what had happened but I had to gather myself and be strong," said the man who won two Premier League titles with Portmore United in 2008 and 2012.

So strong was he that three days later he was back at training and witnessing his father's autopsy.

"I took two days off but went back to training on Wednesday and then went to witness the autopsy," the Clarendon resident said.

"Everyone is asking me if I can play the next leg tomorrow (today) and my thing is of course. When you have a job, any job you have to do what you have to do and with football for the time that you are out on the field it takes your mind away from everything so I will be there," he said of the very important second leg semi-final set for the Anthony Spaulding Sports Complex at 8:40pm.

The added incentive of playing for his father is also a reason.

"I can't stop now. I have to finish what I started. It is not a choice.

"I did pledge to win it (the title) for my people and he is a big part of that," he said defiantly.