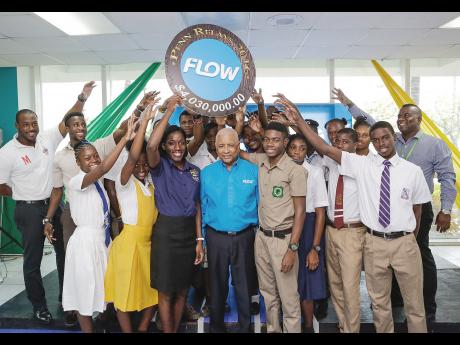 Contributed
Students representing the 28 local institutions pose for the cameras after collecting a symbolic plaque representing a donation totaling $4,030,000 by the FLOW Foundation towards their participation in the upcoming Penn Relays 2016.

Long-time sponsor FLOW Foundation increased its sponsorship package to 28 high schools, colleges and university teams heading to the upcoming Penn Relays, which will be held at the University of Pennsylvania in the United States.

Four million and 30 thousand dollars ($4,030,000) has been shelled out by the telecoms giant, who has added four additional schools to its numbers, marking a 16 per cent increase in sponsorship.

FLOW, which previously operated under the name LIME, returned for the 23rd consecutive year as the sponsor of local teams heading to the world renowned relays carnival which will be staged from April 28-30.

Errol Miller, executive chairman of the FLOW Foundation, described the contribution as "the high point of our activities".

"We have been supporting the teams going off to the Penn Relays long before everyone of these high schoolers were born," he joked, adding that amid inflation, FLOW continues to give young Jamaicans a platform through sports.

"I want to encourage you on two thing. One, it's about being good ambassadors for Jamaica. There are a lot of negatives out there about Jamaica, but as the governor general said, there is nothing wrong with Jamaica than what is right that Jamaica can't fix; and you are the people, the standard bearers as our young people going out there to represent Jamaica," charged Miller.

Albert Corcho, principal of many-time ISSA/GraceKennedy Boys' Championship winners Calabar High, issued thanks on behalf of the athletes, whom he described as "stakeholders".

"I am so happy as I speak Mr Miller. On behalf of the entire school population, I think as principals, we all know how hard it is to fund these trips that you can't budget for," said Corcho.

"The ministry (education) will tell you that you cannot put a Penn Relays trip in your budget. They will not approve the budget, so we have to find creative ways, and I think what FLOW has done in the last 23 years has come on board in a very big way to help the schools to offset this huge cost," he observed.

High schools sponsored for the first time by the foundation are Greater Portmore, Petersfield, Green Island and Bellefield.