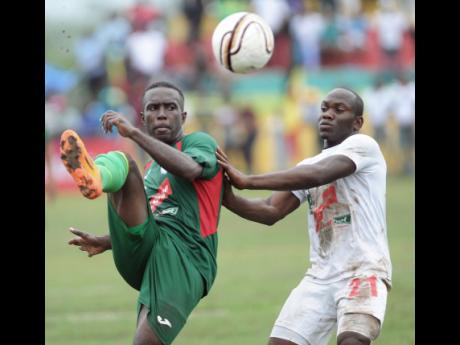 Ricardo Makyn
Humble Lion's Ricardo Cousins plays the ball while being challenged by his close friend, Portmore United's Michael Binns, during their first-lkeg Red Stripe Premier League football semi-final at the Effortville Community Centre on Sunday, April 10. Binns netted a double in Monday night's return-leg semi-final at Anthony Spaulding Sports Complex and dedicated his team's win to the just-deceased Cousins' father, who was a former supporter of Portmore United.

Michael Binns was easily Portmore United's man of the match for his double strike and all-round classy performance in their 3-1 second-leg semi-final win, which gave them a 4-3 victory on aggregate and a place in the Red Stripe Premier League (RSPL) final against Montego Bay United.

Binns' classiest performance of the night, though, came off the field and occurred when he dedicated the win to the deceased father of one of his opponents, Ricardo Cousins.

"This victory means a lot to me, and I just want to dedicate it to my friend Ricardo Cousins' dad, even though Ricardo was on the losing team tonight," the midfielder said, as he soaked up all the adulation at the end of the game.

He also went over to console Cousins and some of the other Humble Lion players.

"Ricardo is a very good friend to me, and his dad was a member of Portmore United. He was a big fan of Portmore, so I want to dedicate this one to him," added Binns, who was captained by Cousins to the schoolboy triple crown while playing for Glenmuir High in 2004; and who also played alongside him when Portmore United won the RSPL in 2008.

Of the game itself, Binns said that things went better than they planned.

"Our intention coming into the game was to keep our head and try to get an early goal and take control of the game, and we got two, so that was great," added the 27-year-old, who confessed to being overwhelmed.

While not being a prolific scorer, Binns, who returned to the club in October last year after a number of years living in Florida, said he was prepared for the opportunities to come.

"I am the dead-ball kicker in the team, so I was not surprised when the opportunities came. I had been practising them all week, and whenever I get a chance, I am pretty confident that I am going to put them away.

"I have scored six goals so far this season and these are my most important two," continued the man who is dreaming of playing a part in taking Portmore United from promoted team to champions.

While stating that he was looking forward to going back to the States to his wife and family, Binns said that will come after the finals.

"It is great to be back. It is really wonderful, and while I have to go back to the wife and family, I am staying until after the final," he said, with a broad smile.