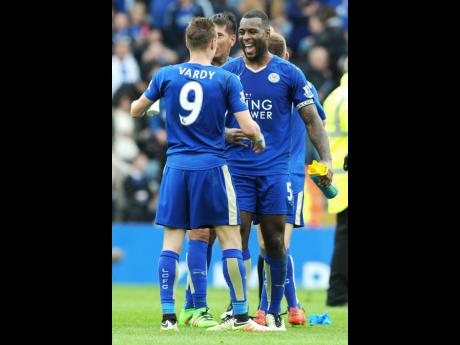 Jamaica international Wes Morgan was one of four Leicester City players named in the Professional Football Association's team of the year in London, England, yesterday.

The 32-year-old England-born Morgan has been one of the linchpins of Leicester's defence this season, as the minnows have stunned the Premier League with their astonishing title bid.

Leicester are closing in on their first-ever title, leading the standings with 73 points - five clear of North London side Tottenham Hotspurs - with four games left in the season.

Morgan, who skippers the Foxes, has featured in all 34 Premiership games for them this season, scoring a single goal. That strike proved massive, as it lifted the leaders to a crucial 1-0 win over Southampton earlier this month.

He spent most of his career at Nottingham Forest where he became their longest-serving player, before moving to Leicester in January, 2012.

Morgan helped Leicester win the Championship in 2014 and then scored two goals as they managed to finish 14th in the Premiership.

He has been a regular for Jamaica and was a key part of the side that reached the final of the CONCACAF Gold Cup last year, and is currently involved in the country's sputtering World Cup qualifying campaign.

As expected, Morgan's teammates Jamie Vardy, N'Golo Kante and Riyad Mahrez, have all been included in the PFA team.

Vardy's 22 goals have been the catalyst for Leicester's extraordinary campaign while midfielders Kante and Mahrez have been revelations.