Sky’s the limit for McLeod – Graham 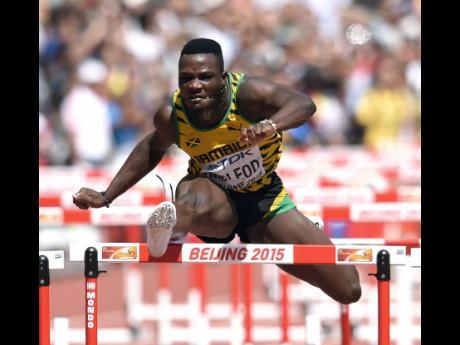 The early-season form of Omar McLeod has one of his former high-school coaches thinking about the world record.

Graham also believes that McLeod and Hansle Parchment could make hurdling history for Jamaica at this summer's Olympic Games in Rio de Janeiro.

"He is the first hurdler I've seen with so much speed, and when you have speed," he explained, "you're going to run fast".

The long-time coach believes McLeod was unlucky to hit the hurdles in last year's World Championship final and said: "I think he will break the world record soon."

However, he struggled in the World Championships final where he placed sixth. Parchment peaked well at the Worlds to be runner-up to Russia's Sergey Shubenkov.

Graham isn't the first to project world-record potential for McLeod. Just after McLeod's Nationals wins, 1966 CAC silver medallist Ray Harvey said: "His form is immaculate, impeccable, but his speed is what really, I think, could propel him probably close to the world record."

McLeod has recently run 9.99 seconds for the 100 metres, but Graham doesn't believe the accelerated velocity will create problems.

"All he has to do is fix his leg sometimes by not hitting the hurdle," he suggested.

"Once he's clean, we're going to see something fantastic soon, before even Rio", Graham said, using hurdling terminology to describe a race when the athlete isn't slowed down by contact with any of the 10 obstacles.

More broadly, the experienced coach thinks that McLeod and Parchment could both win medals in the 110-metre hurdles at the Olympics.

"Once Parchment gets his start, we could see Jamaica creating history - a quinela," he predicted.

"With Omar's early speed, once Parchment gets his start, Jamaica is in for some good times in the hurdles," he concluded.