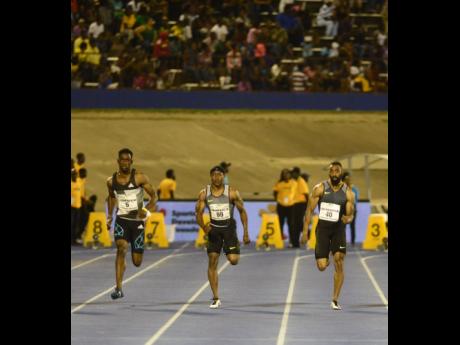 Gladstone Taylor
Jamaica's Kemar Bailey-Cole (left) races alongside the United States' Mike Rodgers (centre) and Tyson Gay, during the men's 100 metres at the Jamaica International Invitational at the National Stadium on Saturday night. Bailey-Cole won in 10.01 seconds ahead of Rodgers, 10.03, while Gay placed fifth in 10.08.

While not ruling himself out of medal contention at the upcoming Olympics in Rio de Janeiro, Brazil, American national record holder Tyson Gay feels it will be hard for anyone to stop six-time Olympic Gold medallist Usain Bolt from retaining his men's 100m title.

Gay, who was running his first race of the season, had to settle for fifth in 10.08 seconds at Saturday night's Jamaica International Invitational meet at the National Stadium.

The race was won by Racers Track Club's Kemar Bailey-Cole, who returned from a near - year-long injury lay-off to clock 10.01 seconds, beating American Mike Rodgers (10.03) and MVP/UTech athlete Julian Forte (10.06), who placed third.

Gay will be running in his last Olympics and said he will be working hard to medal, but remains mindful of the familiar threat of Bolt, whom he considers the "best in the sport" and the one who "brought the sport back to the top".

Gay put Bolt in the top two greatest of all time, alongside American legend Carl Lewis.

"The guy (Usain Bolt) is a great competitor, great heart. Excuse my language ... the sh*t he pulled off last year was amazing. Not having many races and to be able to perform at the World Championships was amazing," Gay told The Gleaner.

The American, who has been locked in rivalry with Bolt, reveals he did not doubt the Jamaican last year and will not doubt him this year either.

"I didn't doubt him because I have seen him do amazing things. I was more like shocked that he pulled it out. It was amazing," Gay continued, adding that he watched Bolt do his rounds from his hotel room and remarked to his roommate "this guy is just amazing".

When asked how Bolt compared to the all-time greats, Gay ranked the Jamaican "top two of all times".

"You know Carl (Lewis) has done some great things even though he's done more events and what not, but Olympics and World records, nobody else has done that besides Carl, so he (Bolt) is definitely top two," assessed Gay.

Gay is the joint second-fastest man ever at the 100m with 9.69 alongside Yohan Blake of Jamaica. Gay, a 2007 double World champion, finished second best behind Bolt in 9.71 seconds at the Berlin World Championships in 2009.

Bolt had emphatically reduced his previous world record of 9.69 seconds to 9.58 in Berlin.

'BEST IN THE SPORT'

"He is the best in the sport and he has done a lot for our sport. He brought the sport back to the top, so much respect for that," Gay said, adding that athletes get way more money now in terms of contracts and appearances.

"I think Bolt and the US guys set the standard," stressed Gay, who believes he will be ready for Rio.

"I see myself being able to compete with the best of them. My coach will be assisting me to try and run fast at trials and run fast at the Games and in between (that) it is what it is," he pointed out.

"I have a lot of work to do, I am sure. We are gonna go back to the drawing board, my coach and I, and fix some technical things, and I know I can make the team," he stressed.