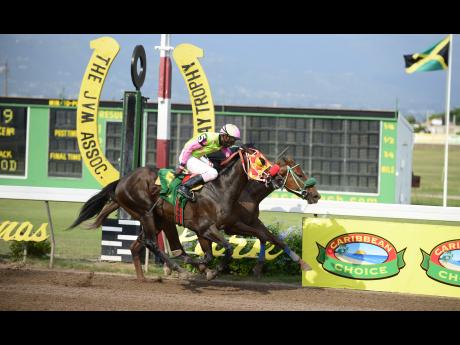 Gladstone Taylor
LORD EQUUS (No.5), with Oneil Mullings aboard, wins the ninth race ahead of the Jerome Innis-ridden BLUE MOON (Jerome Innis) at Caymanas Park on April 30.

With no trophy at stake, today's nine-race programme at Caymanas Park will be highlighted by the running of the open allowance race to be contested by nine starters over 1100 metres. Post time is 1:10 p.m.

The race should resolve itself into a keen tussle among the trio of CAMPESINO, CRUCIAL APPEAL and SHINING LIGHT, who won the Easter Sprint Cup over this trip on Easter Monday ahead of subsequent winner DWAYNE STAR.

That performance speaks volumes for the Gary Griffiths-trained SHINING LIGHT, even though the consistent four-year-old colt came back to finish third behind DWAYNE STAR and the then odds-on favourite CAMPESINO over 1400 metres on April 30.

Still, SHINING LIGHT will need to produce a career-best effort in order to upstage CAMPESINO and CRUCIAL APPEAL, both owned by Hamark Farms (Howard Hamilton), but conditioned by different trainers.

CRUCIAL APPEAL, who races for the first time since July of last year, is the more accomplished, having won the grade-one Lady Geeta Trophy over 1200 metres ahead of UPPA TUNE, PERFECT NEIGHBOUR and POTCHEEN in April of last year.

The six-year-old gelding, who now takes orders from Dwight Chen - moving from trainer Patrick Lynch - left us 10 months ago after finishing third to UPPA TUNE in the Reggae Trophy grade-one race over the straight-five course. Despite the lengthy absence, CRUCIAL APPEAL has worked well in preparation for this race, galloping 5 1/2 furlongs in 1:08.3 by 1:01.2 at exercise last Saturday morning.

Now dropped in class, indications are that CRUCIAL APPEAL is ready to rumble with a topweight of 57.0kg and champion jockey Shane Ellis. But given his lengthy layoff, CAMPESINO is preferred on the basis of race fitness.

Trained by 14-time champion Philip Feanny, the consistent CAMPESINO beat a good field of open allowance horses over 1200 metres on April 13 in a fast 1:11.0.

Prior to that, he was beaten by top horses SEEKING MY DREAM, POKER STAR, PHINEAS and LONG RUNNING TRAIN in a string of races and over this quick sprint, is given the edge with connections calling up top apprentice Linton Steadman.

Other firm fancies on the card are 2000 Guineas runner-up ORPHEUS, in the third race over 1820 metres; QUEEN OF BAGDAD, now running with Lasix under leading jockey Omar Walker, in the sixth; HAWKEYE in the seventh; and COOL U BOOTS in the closing race.