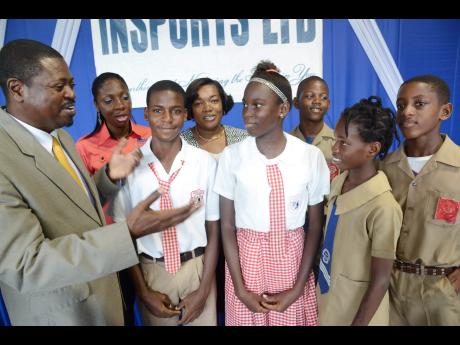 The national sports agency, in keeping with its objective of unearthing and nurturing talent, is contributing a total of $5 million in sporting equipment, to be utilised among outstanding athletes who participate in this year's staging of the meet, which continues everyday through to what is expected to be an exciting climax on Saturday.

This contribution towards primary-school athletes who display exceptional talent is in keeping with the agency's strategic direction, which includes nurturing the talents through extensive coaching programmes.

This is in addition to the $500,000 worth of spikes that INSPORTS will be donating to the winning school.

Also, one of the pivotal terms to access the contribution is for the athlete to continue being active in the athletics sporting discipline throughout his/her five-year tenure in high school.

"Additionally, it will encourage these potential champions to participate in more training seminars, which will maximise their potential and contribute to the development of a nation through sports," added Andrews.

Over the years, the championships has served to unearth some of the nation's top talent and some of the current high school stars, namely Jhevaughn Matherson and Christopher Taylor, the World Youth 400 metres record holder.

This year; Naggo Head expects to win again, but the seven-time winners expect a tougher challenge to retain the four day championship which ends Saturday, and assistant coach, Oral Whilby, believes they have enough to finish atop the podium again.

"We have some very competent schools rising like Rousseau, St Richards and the main culprits in Greater Portmore and Southborough. I expect them to give a good account of themselves and take critical points," said Oral Whilby, Naggo Head Primary's assistant coach.

He added: "We are weak in Class One, but we are very good in the other classes, in the field and middle-distance areas. We should have enough to take us across the line."

Greater Portmore finished third in 2014 and second in 2015 and coach Krisneve Palmer is convinced that they have what it takes to topple the champions.

"Our chances are great again, just like last year. We have worked on our weak areas and make our strong points even stronger. We are right where we want to be, so we are coming strong," he said.

Southborough, which placed third last year, along with fourth place Black River and New Providence, are expected to challenge strongly in the 92-team meet.