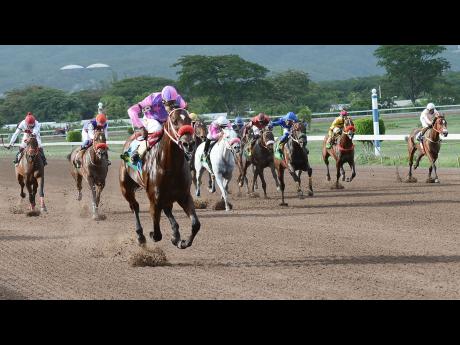 Nelson won race one with favourite Centrefire and also captured the day's final race with another odds-on bet, Seek the Noblest.

Nelson leads the jockeys' standings with eight wins with Welch, a six-time former Northlands champion, one behind on seven.

Nelson opened his account over six furlongs when he steered four-year-old chestnut gelding Centrefire to victory by 11/4 lengths over the three-year-old and upwards who have never won two races.

And though he had to wait until the last race of the day to find the winners' enclosure again, he held his nerve well to carry four-year-old colt Seek the Noblest to a 51/2 lengths trouncing of the three-year-olds over six furlongs.

He duelled through the opening quarter with Welch and 10-1 bet Wild Tactics before drawing off in the stretch to win handily.

In race seven, over the same distance, he stalked from second with the six-year-old bay Midnite Poppa before reeling in pace-setter Red Red Rose at the top of the stretch and storming to the finish by 41/2 lengths to commandingly dispose of the three-year-old and upwards.