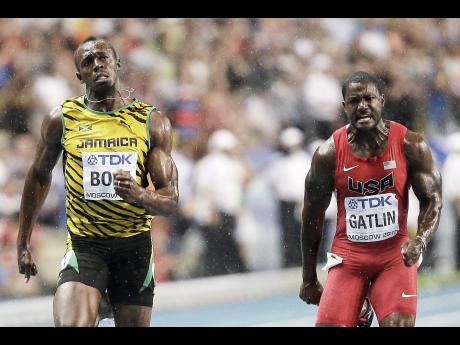 Faster than ever at the near-ancient age of 34, American sprinter Justin Gatlin is drawing inspiration from Kim Collins - the poster boy for golden agers as far as sprinters are concerned - as he responded to questions about whether or not he expects the 2016 Olympic Games in Rio de Janeiro to be his last.

Gatlin, who returned from a four-year ban in 2010 after he had failed a drug test, has seen some of his best form since coming back into the sport.

It's reason enough for the double silver-medal winner from last year's World Championships in Beijing to keep the thought of retirement away from his mind.

It doesn't matter to him that by the time the 2020 Olympic Games in Tokyo come around he will be 38 years, Gatlin says he is not ready to put an expiration date on his career and is not ruling out the possibility that he'll still be going at it in Japan.

"I can't confirm it's going to be my last Olympic Games," Gatlin laughed after winning the men's 100m in 9.94 at the IAAF Diamond League in Shanghai on Saturday.

Gatlin had one of his best seasons in 2015, lowering his personal best to 9.75 seconds and racking up an unbeaten streak that was only ended by Usain Bolt at the World Championships in both short sprint finals.

But Gatlin says he doesn't want to harbour thoughts of his career's end in fears that it may affect his approach and hunger going forward.

"If I start thinking this will be my last Olympics, I will already start thinking about winding down, and I want to stay aggressive, I want to live in the moment. I want to go out there and compete to the very best of my ability like I do now, like I do every time I step on the track," Gatlin said.

"I am a true competitor at heart. I always look forward to these occasions - the rounds and so on. The Olympic trials itself is going to be hot competition, and getting on the team is going to be a big challenge as it would be an honour for me to be on the team once again," he said, as he looks ahead to what would be his third Olympic Games.

But with 40 year-old Kittian Kim Collins still competing and lowering his times in what can be described as the post-credit stage of his career, Gatlin feels it's possible that he, too, can further extend his career beyond the normal shelf life.

"I will see what I can do. Kim Collins has gone this long, so maybe I will as well ... we'll see what happens."