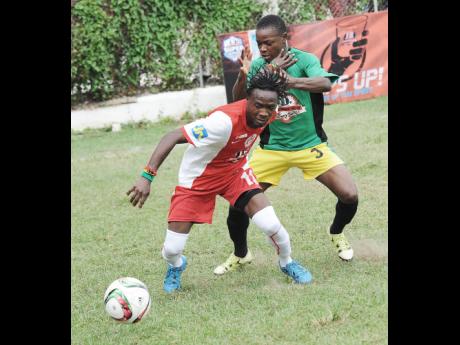 Jamalco Football Club moved a step closer to qualifying for the Red Stripe Premier League for the first time when they clipped Maverley-Hughenden 1-0 at the Maverley complex yesterday.

The Clarendon team is now five points clear of Maverley and Brazil FC, who defeated Granville 2-1 in the other game Johnson says this win has placed them in a great position to claim one of the two available spots.

"We are really happy about the three points here. It's really a plus. To get nine points in the first three games makes us really proud. Now, we have a good chance (to qualify), but we are not there as yet. We have to try and get maximum points on Wednesday," he said.

The visitors started as the better team, and Andrew Isaacs wasted a glorious opportunity in the opening seconds. They had the better of the home team for the best part of the first half-hour but without any other real chances.

Maverley came into the own in the last 15 minutes and only goalkeeper Sheldon Mills denied them a go-ahead goal from Everald Peddie's five volley. They should have definitely taken the lead in the 76th minute, but Rohan Williams shot against the bar from six yards with the goal at his mercy.

Minutes later, Jamalco broke and Issacs beat the offside trap and crossed to Elliott, who sent a glancing header over Damian Campbell in goal. The hosts then went all out for an equaliser and came close through Locksley Thompson in the 87th minute, but Jamalco held out for another crucial win.

Maverley's assistant coach Hugh 'Bingy' Blair says injuries continue to hamper them, but he believes they had enough chances to come away with something from the match.

"Things are bad for us right now because Brazil are a good team and they are playing well, so to go there and beat them will be a hard task, but we can rebound. We just need to come back with a winning frame of mind," he said.