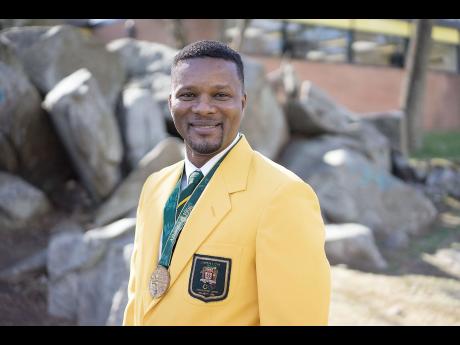 Retired Olympian, Dennis Blake says he is hoping to use his book, Dennis Blake's Memoir: An Olympian's Hidden Secrets, to help young athletes, their parents, coaches and stakeholders of track and field to "knock out fear, overcome challenges and achieve their goals".

Blake, 45, describes himself as a coach, does consultation and gives motivational speeches to students, athletes and professionals seeking to reach the highest levels in sport.

"This book opens an important conversation for anyone who is struggling to make a difference in their lives and to fulfil their personal goals," he said.

"Readers will be inspired by the indelible stories which will also shed light on the significant challenges faced by athletes when competing at the elite level," Blake told The Gleaner in an interview.

His book will be published in two parts, the first of which is scheduled to hit the shelves in summer in the United States and will be sold for US$14.95.

"My hope and dream for this book is for it to be read by all athletes. It is mostly geared towards those disenfranchised athletes, those athletes who have goals and feel like they can't make it or they don't see any light at the end of the tunnel," added Blake, who is now based in the United States.

Blake recalled that his humble upbringing in the deep-rural Morningside district in St Elizabeth, and his everyday struggles to attend St Elizabeth Technical High School, "propelled" him to win a relay bronze medal at the 1996 Olympics in Atlanta, Georgia, and silver at the 1995 World Championships in Gothenburg, Sweden.

"It's (book) going to start a dialogue and open the eyes. To be honest, I am not trying to be a millionaire from this book, My hope is that it will reach in the hands of all high-school athletes and they will be able to take this book home and let their parents read it," explained Blake, who says he wants to help athletes stay focused "on the rugged path to athletic prowess".

He added that, the track arena is not going to be easy for the athletes, while noting he suffered "fights" during his time on the track.

"The whole idea is to motivate athletes who come from a struggling background, disenfranchised kids. Kids sidelined and losing hope, this book is going to teach them to fight that type of demon and propel themselves

"I've had the experience of making the national team and some people did not want me on the 4x400m and coaches told me I am to stay focused, and I know exactly what that meant ..." he recalled.

Blake is of the view that past athletes are not well appreciated in Jamaica but he considers them "trend-setters for upcoming athletes to excel towards".

"I find that with professional athletes, they have no backbone these days ... .

I have had experiences where these athletes just take anything. Sports in Jamaica has gone to a point where it's all about winning, and athletes have suffered for the sport that they love, and the book is going to talk about some of the challenges that I have faced and correlate it with some of the challenges that other athletes have and will face over the years," stressed Blake.