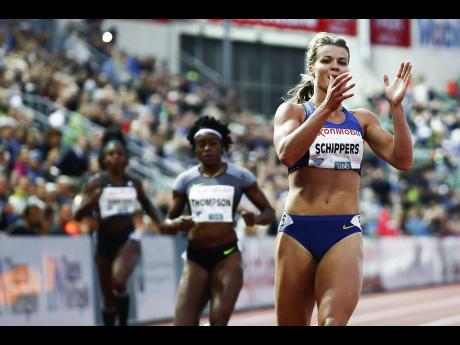 AP
Dafne Schippers (right) of Netherlands celebrates after winning the women's 200 metres in 21.93 seconds during the 2016 IAAF Oslo Diamond League athletics meeting yesterday. At second right is Jamaica's Elaine Thompson who was second in 22.64. 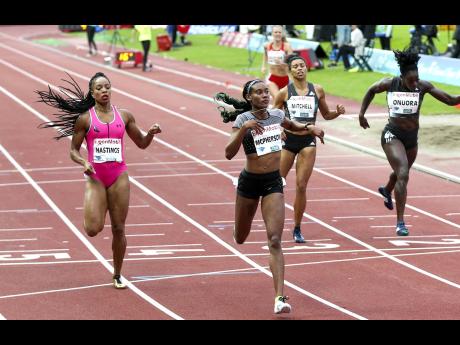 AP
Jamaica's Stephenie McPherson (second left) winning the women's 400 metres at the Oslo Diamond League meet yesterday. Also in photograph from left are Natasha Hastings of the US, Morgan Mitchell of Australia and Anyika Onuora of Great Britain. McPherson won in 51.04.
1
2

Stephenie-Ann McPherson registered her first Diamond League win of the season, topping the women's 400-metre field in a time of 51.04 seconds at the Exxon Mobil Bislett Games International Association of Athletics Federations Diamond League meeting on a chilly evening at the Bislett stadium, yesterday.

McPherson ran a measured race, pushing in the final 100 metres to take the event from the United States' Natasha Hastings, 51.38, and compatriot Novlene Williams-Mills, 51.66.

The time was slower than the sub-50 seconds time McPherson was hoping for.

"I think I executed an OK race. Not a perfect one. I'm working on it, and I'm getting better each and every race," she told The Gleaner, while complaining about the chilly temperatures.

"I think I was expecting a faster time, but a win is a win, and I have to give God thanks for that," she added.

GETTING THE RIGHT SHAPE

Williams-Mills said it was all about getting in the right shape for the trials later this month.

"It was just another race getting ready for the national championships. Just to get a few more races before then," Williams-Mills, who is planning to race next week in Stockholm, Sweden, said.

"Every race is different. No matter what place I finish in any race, the goal never changes," she said.

The much-hyped 200m clash between Jamaica's Elaine Thompson and The Netherlands' Dafne Schippers went according to the Dutchwoman's script as she not only won, but also lowered the 22-year-old meet record of 21.94 seconds set by Gwen Torrence in 1994.

World champion Schippers was superb as she blew past the field on the curve and pulled away on the stretch, leaving Thompson in her wake. Schippers posted 21.93 to Thompson's 22.64, while another Jamaican, Simone Facey, finished fourth in 22.88 behind Bulgaria's Ivet Lalova in 22.78.

"It was the second-hardest 200m I ever ran," Thompson said, although she was never quite clear on which was the hardest.

"Last week, I ran my first 200m. It wasn't as hard as this one. It's cold and I'm not used to these temperatures," she said.

Thompson had high praise for Schippers.

"She's a good athlete, a good competitor, so I have to just go home and put in some work and see what happens from there," she said.

Meanwhile, O'Dayne Richards improved on every throw but could not get close to his target of 20.54m, finishing sixth in the men's shot put with a distance of 19.14m, thrown on his third and final attempt.

"Disappointed again. I don't feel too good about it," Richards told The Gleaner afterwards.

"It was a bit cold out there. They had some pauses in the competition and I got even colder. I had some technical problems as well," Richards, who said it would be his final meet before national championships, admitted.

Diamond League leader, Joe Kovacs of the United States stayed ahead after throwing 22.01m on his final attempt though it was well below his season's best 22.13m.

Reigning World Junior champion Konrad Bukowiecki of Poland threw a World Junior record 21.14m on his fourth attempt, improving on the previous mark, 21.01m, he threw in Ostrava, Czech Republic, on May 20.

His throw was good enough for second as his countryman and Olympic champion Tomasz Majewski finished third with 20.56m.

There was a late mishap for Kim Collins of St Kitts & Nevis in the men's 100m. Collins, who has looked in good form all season, won the men's 100m in Birmingham on Sunday. The 40-year-old was leading here up to 80m when he pulled up and hopped to the finish line with a suspected groin strain.

The Diamond League moves on to Stockholm, Sweden, next Thursday.