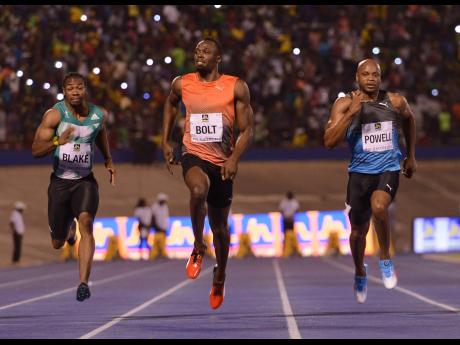 USAIN Bolt expressed some amount of satisfaction with his performance after notching a season best 9.88 seconds to win the men's 100 metres at the first staging of the JN Racers Grand Prix at the National Stadium.

"I am extremely happy to have won the race and also to do a season best, although it was not a perfect race," said Bolt.

"It was also good to be back home (and) competing before my fans as it has been a long while."

Thousands of fans crammed the National Stadium to witness the event at which the men's 100 metres drew much attention because, for the first time in over three years, the world's most outstanding figure in the sport, Bolt, was down to compete in a high-quality field that included the likes of Asafa Powell and Yohan Bake, who all have an excellent record in the event on the world stage.

When the athletes, especially Bolt, made their appearance inside the main stadium, the crowd went wild. The noise got louder when the big screen picked up both Bolt and Powell stripping down at the start.

After a slow start to the season in the 100 metres - with two sub-par performances by his standard, where he clocked 10.05 seconds in the Cayman Island and 9.98 seconds in Ostrava - there were many in the crowds who were harbouring thoughts of Bolt losing his first 100 metres in years.

But cometh the hour, cometh the man as Bolt once again proved that when it comes to the big stage, he will deliver, and that he did.

Despite stumbling at the start, he recovered, and at the 60 metres mark got by early leader Powell and company and even had time to ease up in the final 10 metres to score an impressive win, the second fastest time in the world this year.

Only Frenchman Jimmy Vicaut, who clocked 9.86 seconds in Montreal on June 7, has gone faster.

It was a bang-up finish for the remaining places as Nickel Ashmeade did a season best 9.94 seconds to finish second, the same time done by third-placed Blake, while Powell (9.98) finished fourth.

After the race, Bolt showed his appreciation by jogging around the entire track, waving to the crowd in the bleachers and the grandstand as the cheering went on for several minutes with the crowd in a frenzy.

Asked if he was surprised by the time, Bolt said: "No, I am not surprised as I felt good coming into the race, and with a better start, it would have been much faster."

Ashmeade, who spoilt the part by coming second after an average season so far, spoke about his performance.

"I am feeling good and I am not surprised coming second as I have been training real hard, and although starting the season on a low due to bronchitis problems earlier, I felt extremely confident that I would have done well."