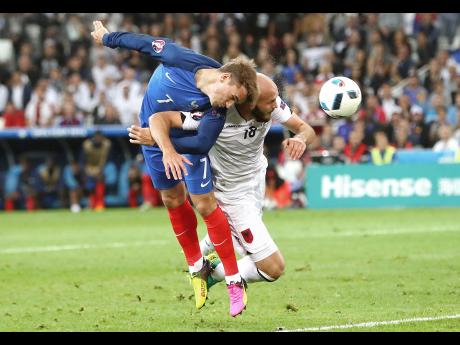 AP
France's Antoine Griezmann (left) and Albania's Arlind Ajeti vie for the ball during the Euro 2016 Group A match between France and Albania at the Velodrome stadium in Marseille, France, yesterday. France won 2-0.

Late goals from Antoine Griezmann and Dimitri Payet helped France become the first team to advance to the knockout stages of the European Championship yesterday with a 2-0 win over Albania.

For the second consecutive match, late pressure rescued a patchy France side that is struggling to live up to its pre-tournament billing as one of the favourites.

Against Romania on Friday, it was Payet's superb strike from distance that won it, and this time - with the clock running down - Griezmann placed himself perfectly to nod in a cross from centre half Adil Rami.

France President FranÁois Hollande jumped out of his seat and thrust his arms in the air, and the Stade Velodrome rose as one to hail Payet after another outstanding finish.

With grace and poise reminiscent of France great Zinedine Zidane, Payet cut in from the left and beat two players before curling in the second goal. It was the perfect cap for a play that started with a brilliantly accurate 50-yard diagonal pass from Paul Pogba.

Payet was France's creative force and is fast forging a reputation as both a creative supplier of chances and finisher of lethal quality.

But it was cruel on Albania, which nearly took the lead early in the second half when right back Elseid Hysaj drove in a powerful cross that France defender Bacary Sagna turned on to the post while under pressure from midfielder Ledian Memushaj.

The ball flicked back off the post on to Memushaj's head and rolled wide.

It was a reprieve for a complacent France side and an even more complacent crowd that jeered its players off the field at half-time, doubtless hoping for an easy ride against a team most observers had written off as defensive workhorses.

Confounding that generalisation about weaker sides, Albania clearly came to play and made France sweat - especially left back Patrice Evra, tormented all night by Hysaj.