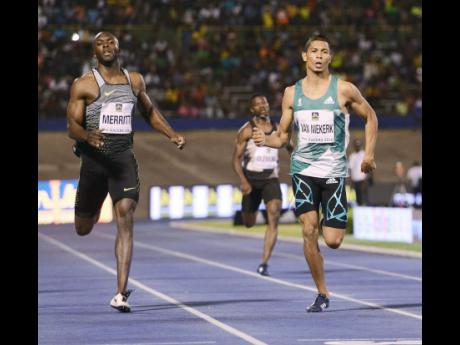 Ricardo Makyn
The USA's Lashawn Merrit (left) tries his best to keep up with South African Wayde Van Niekerk in the men's 300m at the recent Jamaica National Racers Grand Prix at the National Stadium. Van Niekerk won in 31.03 seconds. 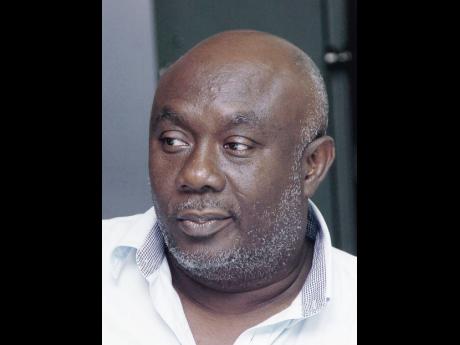 The inaugural staging of the Racers Grand Prix has come and gone. The event was conceived among shouts of "can the country afford it" and "we already have a world-class meet? This column viewed all that as fair comment. The Jamaica International Invitational, held annually, on the first Saturday in May, was already embedded in the mind and challenged the pocket of a country grappling to afford basic developmental infrastructure in addition to health and social necessities.

The Racers family, led by global coaching boss, Glen Mills, must have heard, but along with a team of organisers, pressed on. What they managed to expose to a massive live audience, two Saturdays ago, plus the millions watching from elsewhere, spoke in stentorian terms. It more than justified the effort and will last as a true testimony to resilience and the resolve to prove the doubters wrong.

The execution of the showcase of world-class stars, was top shelf - worthy of being considered for a higher ranking on the world calendar. As a journalist with a particular leaning to the sport on show, an impression of completeness was created. Even against the background of not being at the park and having to lean on other sources, one could identify an honest effort to satisfy those who were granted accreditation.

The person or persons responsible for this area, had clearly benefited from the many forays to foreign platforms of excellence, picked up a thing or two and replicated. It will not be a carbon copy of what entails in fora extensively blessed with greater funding, but within the constraints of their own budget, they tried. If there was a problem and again, as a result of dialogue elsewhere, there could have been more thought given to allowing press credentials to some who have served the sport dutifully and with diligence, but were forced to do external coverage.

The event run-off trended to perfection with the need for precision, well respected. It adds to fan comfort and will hasten that coveted thumbs up, in the overall assessment of the spectacle. Whatever delayed the start of the men's 400m hurdles, must be tackled and avoided, next time around. From what has been gathered from those present, the display of results on the on-field screens, has improved by a long way. No more of the struggle to decipher the names and marks of the athletes.

When Jamaican athletes take on the cauldron of elite competition, the stage is set for energy, excitement, and ecstasy. They did not disappoint. The ultimate queen of contemporary sprinting, Shelly-Ann Fraser-Pryce, came to the party and set aside all fears of lack of readiness for the Rio Trials in just short of three weeks. She dismissed the stern and race long challenge of the World Indoor Champion, Barbara Pierre from the US, to grab the 100m for their gender. That performance by this gift to the nation, will keep alive the dream of the unprecedented triple Olympic 100m victories, that will escort Foster's Fairplay into the city, which breathes samba and soccer.

That apart, there were other pleasing outcomes on a personal basis. They came from the sprint hurdles events. Heartiest congratulations to Deuce Carter and Megan Simmonds on their personal best runs at 13.20 and 12.86, respectively, and wish them all the very best as they position themselves for Trials and Rio. Close to those, is the fantastic and back from last race mishap, Jason Livermore at 10.03 - another lifetime best - in his 100m A race win. They also assisted in making the meet one to be remembered.