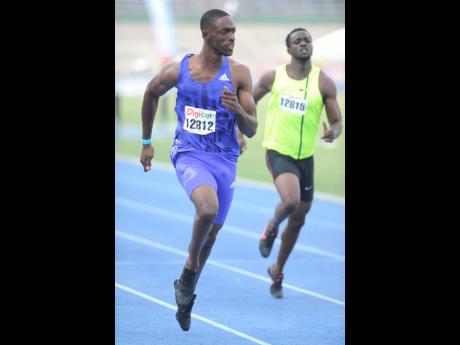 Commonwealth Games 100m champion Kemar Bailey-Cole admitted that he is a bit worried about his level of preparation going into next week's Olympic trials - the JAAA/Supreme Ventures National Senior Championships - after suffering from the Zika virus for the past few days.

It's the latest episode in a rough couple of years for Bailey-Cole, whose 2015 season was seriously affected when he contracted the Chikungunya virus and later damaged his hamstring on his way to a 9.92 personal best, while competing at the London Anniversary Games.

In addition to his Zika virus condition, Bailey-Cole is also just returning from a two-week hamstring setback, but he maintains that he is not allowing the situation to affect his focus going into what will be an eagerly contested 100m test, noting that he is determined to give his best despite the issues.

"Yes, I am a little worried (about preparation), but I am not letting that get in front of me. I am just praying that I get the strength to carry me through the rounds," Bailey-Cole told The Gleaner yesterday. "Recovering is not easy because as we speak, the rashes are still on my body. My eyes hurt, but the best thing is that I am not feeling any muscle pain at the moment.

"I didn't know I had it (Zika virus) until I went to get a haircut. After cleaning up, my girlfriend realised a bump was on my neck, which was a lymph node. But long story short, I didn't know I had the virus and I have been training with it for like three days now," he added.

"I was experiencing back pains and muscle soreness, but I thought it was just soreness from the exercises I was doing," Bailey-Cole said before sharing his disappointment with what he described as his worst level of preparation at this stage of a season.

"It is very disappointing but as I said earlier, I was training with it and didn't know, so I still got in some work but not how I wanted it," he said. "(I am) just going to trials with the mindset that I am healthy and ready."

Bailey-Cole, who finished third in the 100m at last year's trials, had to skip the IAAF World Championships in Beijing because of the hamstring injury he suffered in London.

At next week's trials, Bailey-Cole will go up against the likes of six-time Olympic champion Usain Bolt, Asafa Powell, Yohan Blake, Nickel Ashmeade, and Jason Livermore for a place on Jamaica's team to the 2016 Rio Olympic Games.