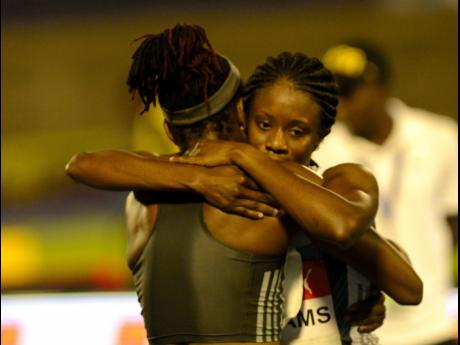 Ricardo Makyn
Danielle Williams is consoled by her sister, Shermaine, after the women's 100 metres hurdles final at the JAAA/Supreme Ventures National Senior Championships at the National Stadium on Sunday. Williams, the defending champion and World champion, crashed out after hitting the hurdles and being forced to stop.

The 24-year-old Williams got safely through to Sunday's 100m hurdles final, but could only react in dismay after her last push ended terribly wrong when she hit a hurdle and was forced to stop. Right then, the Lennox Graham-coached Williams' Rio dream was unceremoniously over.

According to Williams, she was under no pressure in Sunday's race, but noted that the disappointing result has left her at rock bottom.

"Devastated," was how Williams summed up her feeling.

"The main aim was to finish in top three and I failed at that.

"I will take the necessary time to recover from such an emotional blow and try to channel the disappointment into the rest of races this season. I have been coping by speaking with close friends and family, as well as by some of the encouraging words from supporters," the athlete revealed, in an email interview yesterday.

Prior to that, Williams had posted on social media site Facebook: "Broken, but not defeated; I shall rise again.

"Never envisioned this end to my #rio2016 campaign, but in an obstacle race anything can happen. Adversity builds patience and faith, and I know God never makes mistakes," she wrote.

"The disappointment and hurt that I feel now will no doubt fuel the rest of my professional career, and this is truly a minor setback for a major comeback."

When asked how soon she will be able to make that comeback, Williams told The Gleaner: "Not sure what is next. It's hard to find motivation to go on when the thing you were working so hard for is no longer an option."

While admitting she did not foresee such a result, she maintains "I have accepted it", then noted "not yet looking ahead".

Having lost out to unfortunate circumstances, Williams nonetheless remained graceful.

"I have faced adversity in my life and had to overcome many disappointments. My personality doesn't allow me to stay down for too long. I think it's something I inherited from my strong-willed mother," she said in the interview.

"Congrats to the top three finishers, especially (sister) Shermaine Williams because I've seen firsthand all the injuries and hardships she's had to endure since February and she continued to fight, and I'm confident she'll represent us well, as will the rest of team Jamaica," she outlined.

"Thanks to those who offered consolatory messages thus far. I now have four years to prepare for the next staging of the Games, but in the meantime I have a title to defend in 2017.