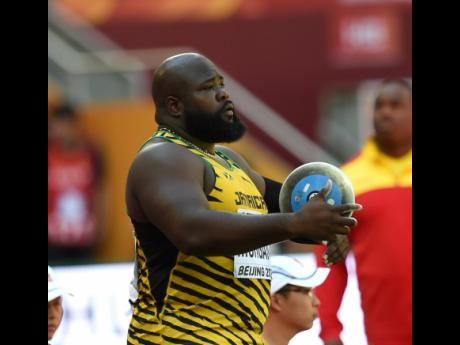 President of the Jamaica Athletics Administrative Association (JAAA), Dr Warren Blake, has confirmed that the association is in receipt of a letter from lawyers representing Jamaican discus thrower Jason Morgan that outlines an intention to appeal Morgan's non-selection for the Olympics before the Court of Arbitration for Sport (CAS).

The defendants are bidding to reverse the JAAA Selection Committee's decision to leave the 33-year-old off the team to represent the country at the August 5-21 spectacle.

Speaking to The Gleaner yesterday, Blake said: "Yes, we (JAAA) did get a letter from a lawyer advising us of their intention to take the matter before the courts.

"It is being dealt with by our lawyers, and, as a result, I cannot speak to it at this point," Blake noted.

Morgan, who threw a mark of 59.08 metres at the event, has also not thrown the Olympic qualifying standard for the event this season.

Blake, in justifying Morgan's omission when the team was named on Monday, noted that the selection committee was not convinced by Morgan, pointing to what he highlighted as the thrower's history of the odd big throw at meets about which they had credibility concerns, as these performances were not repeated elsewhere throughout the season.

However, there are other athletes who were named to the team who only met the qualifying standard in their respective event last season, but also within the Olympic qualifying period.

"[Jason] Morgan did not finish in the top three [at trials], so he has no automatic place on the team. The history with Morgan is that he only throws the qualifying standard at a particular meet early in the season and he never repeats this, so it was the view of the selection committee that he shouldn't be included," Blake told reporters at a press conference used to announce Jamaica's 63-member Olympic team at The Jamaica Pegasus hotel in New Kingston on Monday.

Morgan's 68.19m was listed on the IAAF's Top List as the second best mark in the world last season and is the Jamaican national record.

He won bronze at the 2014 Commonwealth Games with a throw measuring 62.34m.