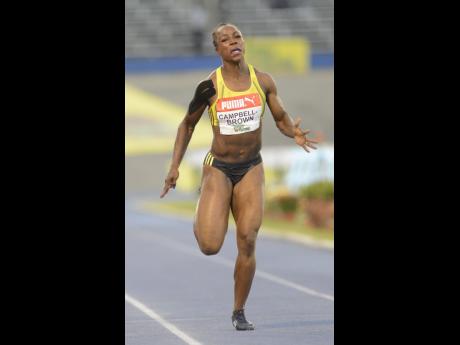 For the second time in a matter of days, Jamaican sprint hurdler Omar McLeod crashed to the track, following up his Monaco Diamond League disappointment with another fall in the 110m hurdles at the Gulyai Istvan Memorial track and field Grand Prix in Hungary yesterday.

It was also the second successive year that McLeod was failing to finish his race at this meet.

So perhaps it is something to think about for the world leader and Olympic gold-medal favourite, who prior to last Friday in Monaco, had not tasted defeat all season in the event.

Meanwhile, Veronica Campbell-Brown continued her good form ahead of her fifth Olympic appearance with victory in the women's 200m.

The two-time Olympic champion in the event took the race in 22.52 ahead of the USA pair of Shalonda Solomon and Tiffany Townsend, who both finished in a time of 22.63.

Simbine, who spent a week training alongside Usain Bolt with attention from coach Glen Mills in the build-up to the Racers Grand Prix last month, set a new personal best and national record, clocking 9.89 seconds to beat Powell into second with a time of 9.92. Mike Rodgers from the USA was second in 10.12.

The South African then returned to win the 200m in 20.16 - another personal best. American Isaiah Young was next best in 20.24 with Lykourgos-Stefano Tsakonas from Greece finishing third in 20.34.

David Rudisha recorded the fastest time this year in the 800m, clocking 1:43.35 comfortably getting the better of his fellow Kenyan Jonathan Kitilit, 1:44.16 and Nicholas Kiplangat Kipkoech, 1:44.90.