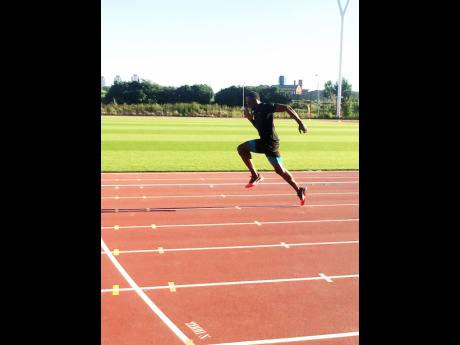 The question of Usain Bolt's readiness to defend his titles at next month's Olympic Games in Rio de Janeiro will be answered on tomorrow's opening day of the London Diamond League.

Strong sprinting, a confident bounce and broad smiles pencilled in the first signs that track and field's poster boy is back to his best.

By the look of things, tomorrow's 200m inside London's Olympic Stadium - a familiar stomping ground for the Jamaican, should carve his return in stone.

Bolt tore a hamstring muscle while competing at Jamaica's Olympic trials on July 1, sending an anxious gasp throughout the sporting world as his Olympic participation hung in the balance.

He would later be forced to end his participation in the meet - a JAAA medical exemption in hand - before hopping across the Atlantic and into the care of his long-time doctor, Hans-Wilhelm Muller-Wohlfahrt, in Germany.

Three or so weeks of rehab and training will be put to the test with a number of eager campaigners, such as Nickel Ashmeade, Alonso Edwards, Adam Gemili and Christophe Lemaitre, all eager for what would, no doubt, be a confidence boosting scalp heading into the Brazilian city.

But Bolt seems to be back to his best after blazing through his final training session ahead of tomorrow's contest, with no sign of that hamstring setback.

Bolt spent the better part of two hours at the newly laid London Marathon Community Track, which sits at the southern end of the Olympic Stadium, to let loose under the watchful eyes of several members of his management team, in a show of confidence that matched a generally positive tone throughout.

He breezed through several sprinting repetitions and looked in high spirits as he completed his programme without any complaint or signs of discomfort.

Still, he'll have to do as much when it matters - with others lined up beside him in a packed stadium with a starter and his gun.

Bolt has not ran a competitive 200m race since winning gold in 19.55 seconds at the World Championships in Beijing, with his five starts in the 100m - which include a 9.88 seconds run at the Racers Grand Prix - being his only appearances so far this season.

This won't be the first time that Bolt will be going into the London Olympic Stadium with a point to prove.

In 2012, there was considerable doubt around his ability to repeat his successes from the previous Games, after he had suffered defeat to Yohan Blake at the National Senior Championships.

Last year, the scepticism was even greater, until a flat season was brought to life with two 9.87-second runs on the same day - a precursor to his triple gold medal a month later in Beijing.

Take into account his 9.85 seconds win in 2013 and his unbeaten run on the London mondo is sure to provide added motivation for a man looking to add another chapter to his Olympics story.