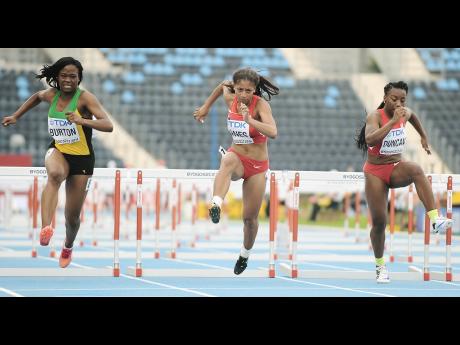 Kermit Taylor
Jamaica's Rushelle Burton (left) races to a national junior record 12.95 seconds to grab silver in the womens 100m hurdles final at the IAAF World Under-20 Championships yesterday. Tia Jones of the United States (centre) was third in 12.89 seconds and Alexis Duncan was fourth in 12.93. 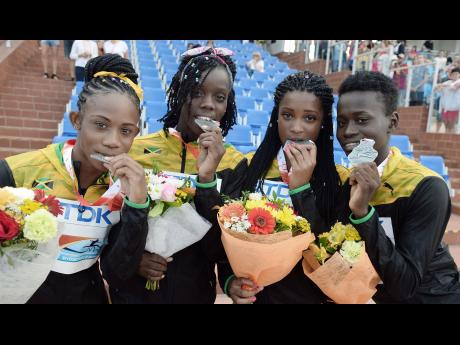 Jamaica's head coach Danny Hawthorne praised the country's athletes for their resilience as they rebounded from a poor start to match their best-ever haul of eight medals at the IAAF World Under-20 Championships (World Junior Championships) and place fifth overall.

The athletes finished the event in Bydgoszcz, Poland, with a flourish on yesterday's final day by winning three more medals - two silver and one bronze.

Jamaican had also won eight medals at Santiago, Chile, in 2000.

"I must first say thanks to the JAAA for the camp leading up to the Championships as this really played a pivotal role in the overall performance of the team. Also, to the coaching and management staff and to all the athletes, who were very disciplined throughout," said Hawthorne.

"The team started off with many mishaps on the opening day, but they pulled themselves together for the remaining days and the good results in the end showed," commented Hawthorne, who paid special tribute to the boys' 4x400m relay team for winning a bronze medal.

Burton won silver in the women's 100m hurdles, with the athletes running with the maximum allowable 2.0 metres per second wind.

Going into the final with the fifth-fastest time, 13.21 seconds, Burton produced her third personal best at the meet as she finished a close second in 12.87.

Burton also became the seventh-fastest ever at this level.

Elvira Herman of Belarus won gold in a Championships Record of 12.85 seconds, while Tia Jones of the United States won bronze in 12.89.

Jamaica, with the fastest time in qualifying and the favourite's tag, won silver in the women's 4x400m through the quartet of 400m gold medallist Tiffany James and bronze-medal winner Junelle Bromfield, plus 400m hurdles silver medallist Shannon Kallawan and Stacy Ann Williams.

In the final event, the men's 4x400m, the quartet of Anthony Carpenter, Sean Bailey, Terry Thomas and young Christopher Taylor on anchor finished third in a season's best 3:04.83.