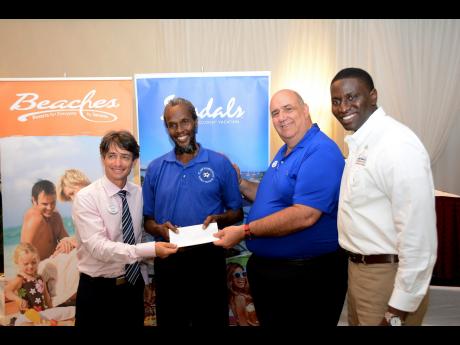 The 2016 staging of the Sandals-sponsored St Ann/St Mary Business House Football Association season promises to be the most competitive ever, according to event chairman Danny Beckford.

Speaking at the recent press launch at Sandals Ochi Beach Resort, Beckford, who is also president of the St Ann Football Association, noted that defending champions Couples Tower Isle will face a daunting task of repeating, as a number of former champions will be in the hunt this season.

Thirteen teams are taking part in the competition, which kicked off with a big double-header on Sunday at Drax Hall in St Ann.

National Water Commission (NWC) and Noranda Bauxite are two of the former champions returning to the competition and Beckford says their presence will add much excitement.

Also speaking at the press launch was Brian Roper, general manager of Beaches Ocho Rios, who emphasised the importance of discipline.

"As sponsors we are very serious about discipline, especially as it relates to starting games on time," Roper noted, while calling on the organisers to ensure teams are penalised for late starts.

He pointed to the fact that Sandals Resort had been sponsoring the competition for the past 24 years, which spoke to their commitment as good corporate citizens.

Ramel Sobrino, general manager of Sandals Ochi, noted that many footballers received jobs as a result of the competition and urged them to take advantage of their opportunities so that they can retain employment after the season is over.

Sobrino stressed his company's commitment in assisting with the development of football in the parish as it played a crucial role in keeping the young men off the streets.

Gran Bahai Principe opened the scoring in the 49th minute via the penalty spot through top player Shavar Brown. NWC, however, stormed back with Dwayne Holmes rounding the goalkeeper to score a masterful goal and earned a well-deserved victory when Ricardo Reid unleashed a scorcher in the 88th minute.

David Pryce, NWC's coach, said: "Team work was important to our success. The team kept its discipline and came away with a very hard-fought, but welcomed win."

In the feature match, defending champions and pre-season favourites, Couples Tower Isle, were held to a 2-2 draw by RIU Ocho Rios.

The teams were met prior to kick off by Sandals public relations managers Ian Spencer and Crissano Dalley, as well as Beckford.

Competition continues today at Drax Hall with Jewels Dunn's River tackling newcomers B & H Inside Ja Holidays at 4 p.m., while in the feature match at 6 p.m., Beaches Ocho Rios are up against former champions Couples Sans Souci.