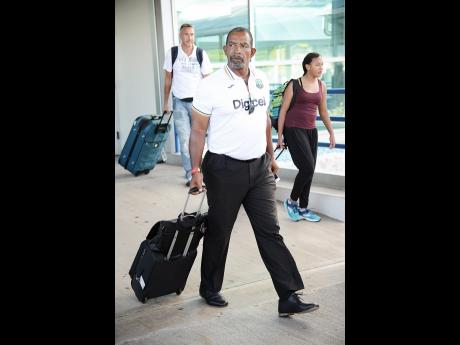 Ian Allen
West Indies coach Phil Simmons arriving at the Norman Manley International Airport in Kingston yesterday ahead of his team's second Test match against India, which will be held at Sabina Park.

Despite surrendering to an innings and 92-run defeat to their touring Indian counterparts, West Indies head coach Phil Simmons says his charges will not throw in the towel, but will look to square the series 1-1, at Sabina Park in Kingston.

The contest is scheduled for July 30 to August 3.

India drew first blood in the four Test series; having scored 566 for 8 in their first innings in Antigua, to inflict an easy trouncing of the regional team.

Both teams arrived here in Jamaica at the Norman Manley International Airport yesterday, ahead of Saturday's start of the second test.

"You can't be demoralised with one Test out of four; there are still three Test matches to go and we know we didn't play well. If we played well and we got beaten like that then something is wrong," Simmons told The Gleaner yesterday.

"We need to move past this thing about youthful team. If we have a youthful team, then we need to bat and bowl and field well and we didn't, and didn't get enough partnerships when we batted so we just have to make sure we do everything a lot better and make sure we bat better in the series," continued the coach.

Simmons says he will stick with the same team, while noting there is no excuse for his charges' poor performance.

"You don't look for excuses. You look for reasons why we do things wrong, and the response is we didn't bowl well and didn't bat well, so we gotta do the both of them well and make sure we level the series," he underlined.

He stressed a belief in the current set of players' ability to get the job done, and hopefully, level the series against India.

"You have confidence in everybody you select. As I said before, we didn't play well," noted the coach.

"Right now, this is the best of what we have, and we have to work hard and do things well," added the former West Indies all-rounder.