Sport needs me to win - Bolt 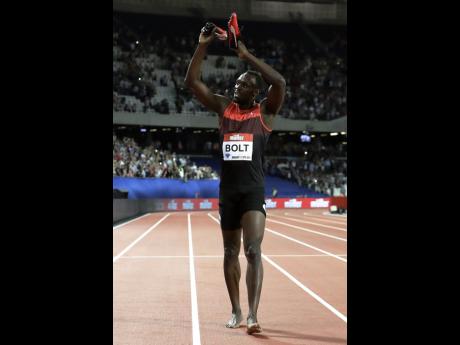 AP
Usain Bolt of Jamaica applauds the crowd while holding his shoes after winning the men’s 200 metres during the Diamond League Anniversary Games at The Stadium, in the Queen Elizabeth Olympic Park in London on Friday.

Whatever controversy is raging in the Olympic world, there's one constant: Usain Bolt's bravado and self-confidence.

It's what is expected from the world's fastest man and greatest showman.

"I know the sport needs me to win - and come out on top," Bolt asserts, assessing the damage caused by the Russian doping scandal that has divided sports leaders.

As for his pursuit of an Olympic treble next month, Bolt adamantly responds: "I'm not going to lose one of the golds, for sure."

In his last lengthy media appointment before heading to Rio de Janeiro, Bolt spent around two hours over a Jamaican lunch last week in London, discussing his Olympic challenge prospects and the challenges of life.

When letting his guard down, Bolt sounded less invincible. Weighing on the Jamaican sprinter's mind is the fear of hitting 30 next month, the toll of injuries - and even being caught up in an extremist attack.

"It is scary," said Bolt, adopting a rare subdued tone. "But if you live scared, you don't live at all, so I try to live my life to the fullest, and when it's my time, it's my time."

Bolt recalls being in Munich as news emerged of the truck attack in the French city of Nice on Bastille Day - July 14 - that killed 84 people. Munich was itself the scene of bloodshed last week when a teenager shot dead nine people.

"Especially at the start of last year I noticed that injuries take a little bit more time to get back to where you want to be," Bolt said. "My coach always tells me that the older you get, it's going to get harder and you have to push yourself."

But coach Glenn Mills also offered him comforting reassurance Bolt still craves, despite being the 100- and 200-metre world record holder.

Bolt remembers Mills telling him, "Don't worry you're a champ," at the World Championships last year.

It was "one of the roughest years", Bolt said, explaining how his back issue "has really deteriorated over the years".

Bolt's preparations for the defence of his Olympic titles (100, 200 and 4x100-metre relay) have been far from smooth, with a hamstring injury forcing him out of the Jamaican trials.

"I always have little doubts in my mind," Bolt said in a restaurant overlooking London's St Paul's Cathedral. "But I'm focused and ready to go."

Unlike many of the world's top golfers, who have snubbed the chance to go to their first Olympics.

"I guess it's not as important to them as it is to us, who have been competing over the years," Bolt said. "It surprised me when I heard that golf was going to be in the Olympics. There are a few sports in the Olympics that make me go 'Argh'."

The Olympics are unquestionably the pinnacle of track and field. But providing the spectacle desired is proving difficult for the men.

"This year is one of the poorest I have ever seen as an Olympic (field) for men really - the women have really shown more promise running fast times," Bolt said. "(The men) have really unperformed this season, but I'm sure when we get to the Olympics it won't be like that."

Bolt expects Rio to be his last Olympics, but he still dangles the possibility of a trip to Tokyo.

"My coach always says 'Usain, you can always go on to the 2020 Olympics if you want'," Bolt said. "So this is why he tells me to stop talking about retirement and just take it a year at a time."

The power of athletics in attracting big audiences would be more difficult without its global superstar.

"People always say to me, 'Usain when you leave the sport, the sport is going to go down'," Bolt said. "But I'm not going to look at it like that. There are a lot of athletes stepping up."

Plans to overhaul the sport and make it more exciting have been sidetracked by the Russian doping scandal.

The vast majority of the Russian athletes who will miss the Rio Games are in track and field, where 67 of their 68 athletes were ruled out when a ban on the Russian team was upheld at the Court of Arbitration for Sport last week.

Sebastian Coe, head of track and field's governing body, has to deal with that.

But Coe is also the man tasked with making track and field "more exciting", as Bolt explains.

"Over time, with different ideas and the athletes that are coming up, the sport will stay current. It will take a while, but I think it will get back to its former glory when I walk away."

Unless he decides to continue, Bolt's glory era is due to end after the 2017 World Championships in London.

He is absolutely certain he will be greatly missed.

"In football, you have the debate who is the best footballer, but no one can debate who the fastest man in the world is," Bolt said. "It's going to be a long time, I think, before somebody comes who will be as talented as me to break my records."