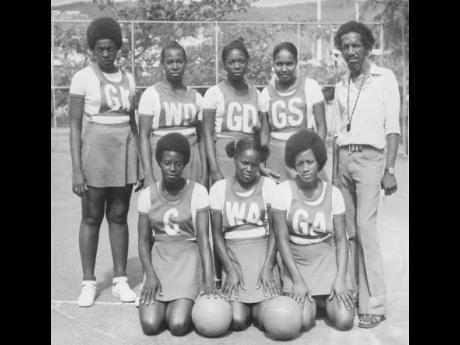 Gleaner Photo
Netball Doubles winners: Waulgrovians, winners of the JNA Open League and the Senior League competitions on Saturday, May 17, 1975. (From left) kneeling are Dorothy Lotry (captain), Joan Hall and Marlene Moodie. Standing (from left) are Elaine Mothersill, Nancy Mitchell, Christine Baillie and Lester Sandford (coach). Second in the Senior League was Speg A with 8 points; third, Pepsi A, Monarchs A and Vauxhall A with 6 points each and fourth, Sports and Games A with 4 points.

MEMBERS of one of Jamaica's oldest and most successful netball clubs, Waulgrovians Bulletts, are staging a reunion this week, 47 years after the club was founded in July 1969 by Lester Sanford.

"Lots of person migrated and every year, everybody said 'let's keep a reunion', and nobody ever took it on, and then someone posted a picture of some players on Facebook and that picture just boosted it right off," the former centre/wing attack told The Gleaner.

"They said it only can start if you (I) do it and being the first club captain (I did)," she said.

Waulgrovians, she said, was founded by members of the now-defunct Waulgrove College, which was based at Avon Park Crescent off Lyndhurst Road.

Lattery-Wilson, who was then known as Dorothy Lotry, played with the club until 1978 when she migrated to the United States.

Some of the players who migrated, she added, later formed a netball club known as 'Roots' in New York.

"And we were champions there also," Lattery-Wilson said.

The reunion started last Saturday with a meet and greet; a church service followed on Sunday at the Church of the Nazarene in Richmond Park; practice at the National Stadium on Monday, and will continue with a cookout tomorrow. Reunion activities conclude on Saturday with a dinner and dance at Stephanie Hall, Holy Childhood High School, in St Andrew.

Waulgrovians now practice at The Queen's School under the tutelage of coach Marvette Anderson.