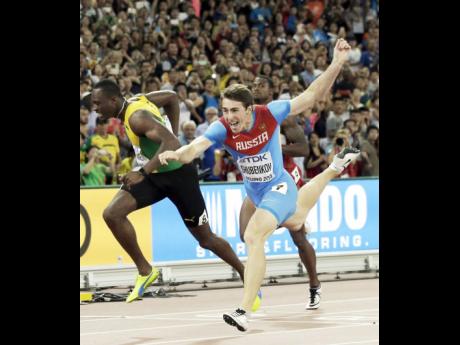 AP
Russia’s Sergey Shubenkov (right) crosses the line ahead of Jamaica’s Hansle Parchment to win the men’s 110m hurdles final at the World Athletics Championships at the Bird’s Nest stadium in Beijing, China on Friday, August 28, 2015.

The initial decision to ban all Russian track and field athletes from competing at the Rio Olympics and the subsequent dismissal of the appeal by the Russians by the Court of Arbitration for Sports (CAS) represent injustice of the highest order, dispensed at the highest levels of administrative authorities in sports and is worrying sign for natural justice as we know it.

The allegations of a widescale state-sponsored doping programme by the Russians is nothing to scoff at, but the International Olympic Committee (IOC), the International Association of Athletics Federations (IAAF), the World Anti Doping Agency (WADA), and CAS collectively blundered on the principle of justice.

Assuming even the worst-case scenario that all the allegations against Russia are 100 per cent true, does it follow that every single Russian athlete is guilty of doping?

Unless we are prepared to make that imbecilic assumption, then what has befallen the Russians is nothing short of jungle justice.

The notion of the good having to suffer for the bad should never ever, under any circumstances be allowed to prevail if it can be avoided.

In the pursuit of fairness and in the absence of conclusive evidence, it is always better for a guilty person to walk free than it is for even one innocent person to be punished for a crime he/she did not commit.

The onus must always be on the accusers to prove the guilt of the accused beyond reasonable doubt before administering punishment.

The guilt of every single Russian athlete has not been even remotely proven, yet the most extreme action has been taken against them.

This is overt injustice.

The leadership of world sport in this instance has acted emotionally, with an obvious undertone of politics driving at the heart of this extreme and draconian decision.

I heard an interview with the reigning sprint hurdles World champion, Sergey Shubenkov of Russia, speaking after the CAS decision and his response cut to the core of this act of injustice.

Shubenkov said he fully understood the crisis, but asked the poignant question: What about the clean Russian athletes like himself, who have worked hard for hours and weeks and months and who have never taken performance-enhancing drugs? Why is he being punished for the actions of others?

It cannot be ignored that what is at work here is a sophisticated and coordinated abuse of power.

The entire world is sitting and cheering this unjust decision that will punish an unknown number of innocent individuals for something they had no part in, nor over which they had any control.

WADA, the IOC and the IAAF need to get over their self-righteousness and their insatiable need to pander to the powerful and seek to use the systems and structures they have in place to guide their policies. They should test the Russian athletes like they test all the other athletes from all the other countries.

These are indeed extenuating circumstances, so by all means, test the Russians twice or even three times as much, suspend and ban the guilty ones and commensurately set the innocent ones free.

Anything outside of that gambit takes them into speculative broad brushing and into the realms of extremism and over-reaction, which invariably leads to injustice.