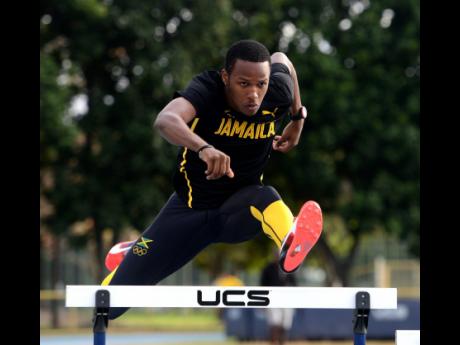 RIO DE JANEIRO, Brazil:
Coach Bert Cameron is encouraging young 400m hurdler, Jaheel Hyde, to enjoy his first Olympic experience and believes he will come out a winner regardless of the outcome of his performance here in Rio de Janeiro.
Hyde qualified for the Olympic Games after finishing second at the National Senior Championships in 48.81 seconds last month and geared up for his biggest test with a 49.03-second win at the World Under-20 Championships in Poland a few weeks ago.
Cameron, who is here in Rio with his young charge, says he is pleased with Hyde’s approach to the Games and while he remains certain the youngster will do well, he has underlined his belief that the 19-year-old will grow and learn from this experience, regardless of his time or position.

“There is no way he can lose. If he goes out there and goes to the final and even gets a medal, he is the greatest thing on Earth. If he doesn’t make it out of the first round, then he would have gained valuable experience, which I’m sure will make him even better, so it’s a win-win for him,” said Cameron. “He has no pressure, but I do believe he will do very well. But he also understands that he will be fine no matter what.”
He added: “I am extremely pleased with him. Jaheel is an individual that really has no limits. He runs according to the competition, he also knows what he is up against here; he is not here to fool himself, but also his ambition is to do the best that he can and he wants to make the finals, we will see what happens after that.
“He is well grounded, he is young, but he knows what his capabilities are. He just came off winning the World Juniors and even though it looked easy you know about adrenaline and the mental that can have for him, but he is here at the Olympics focusing on that.
“He is looking very good in training and hopefully he can take it into competition,” added Cameron, the 1983 400m world champion and three-time Olympian, who himself represented Jamaica internationally at a young age.
“Yes, I remember back in my days just representing Jamaica; I was 20 years old when I made the CAC Games team - which is of course much smaller than an Olympics, but I was one of the best quarter-milers then. I got nervous and didn’t want to compete. I finished a close fourth, but I was praying that I finished fourth that I didn’t get to go run the second round race,” he shared.
“So I know that it’s mind boggling moving up as a junior into the senior ranks, no matter how good you think you are, it can be terrifying. Hyde has done a few senior races and he did well so now he knows what he is up against, I try to keep him calm and let him understand he needs to enjoy himself and do the best he can,” said Cameron.