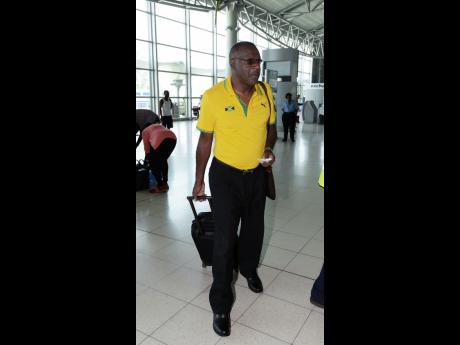 His brave run in the 400m semi-final at 1984 Olympics when he struggled on after picking up a hamstring injury on the backstretch has become a loop in Olympic moments, one that seems to define Bert Cameron's Olympic career.

It was a show of resilience that is used to this day to show the value of courage and dedication in sports.

Yet, for Cameron, who a year later had become Jamaica's first and only World champion in the event, it was hardly the most meaningful memory from those Games.

Cameron recalls his selection as Jamaica's flag-bearer and the experience of leading his compatriots into the Memorial Coliseum at the Games in Los Angeles as perhaps his greatest moment at the Olympics.

"When they had announced that I would carry the Olympic flag, to me, it was one of the greatest moments in my life," said Cameron, who is in Rio as the coach for several members of Jamaica's team, including quarter-miler Christine Day, 400m hurdler Jaheel Hyde, and Kaliese Spencer.

"I was also the big favourite to win the 400m gold medal, so I felt really special. The team wasn't as big as it is now. It was probably half, but it was really an amazing feeling. I remember it well.

"I felt like the whole country was looking up to me. I felt important. I was on cloud nine, and I felt like I was already on the medal podium, to be honest," said a smiling Cameron. "You take extra time to groom yourself. I didn't even want any soil on my shoes because I wanted to represent as best as possible."

"Merlene (Ottey) and I started out at the same time, and at that time, there was even more expectation on me than Merlene, and so it was a honour to carry Jamaica's flag, especially when you consider that Jamaica has so many great athletes," Cameron shared.

"For you to understand it, you have to experience it, and for me, that was my greatest part of the 1984 Olympics. It was a tremendous emotion for me. It's still very special to me," he said.

Shelly-Ann Fraser-Pryce, the two-time Olympic 100m champion, carried Jamaica's flag at last night's ceremony, and Cameron is certain it will have the same effect on her, while hailing the sprinter as the perfect choice as flag-bearer.

"I know how she (Fraser-Pryce) must have felt. She is a patriot. She loves her country and has served it well," said Cameron.

"There couldn't have been a better choice than Shelly-Ann Fraser-Pryce for these Games. She came out of high school, and at her first major event, she won, and won convincingly, repeated in London, and she is looking to create history here.

"She shows that everything is possible and she is certainly deserving of this honour," Cameron added.