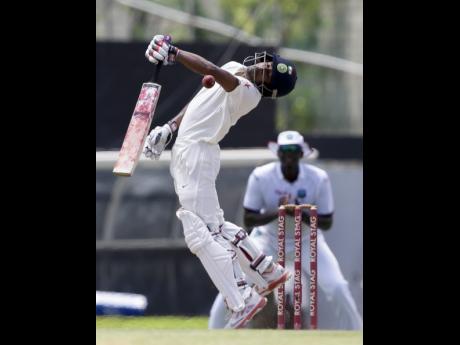 Responding to the visitors' 353, West Indies reached the close on 107 for one, still 246 runs adrift of the first-innings lead, heading into the critical third day of the contest at the Darren Sammy National Stadium.

The right-handed Brathwaite was leading the fight with an unbeaten 53 and was partnered by Darren Bravo, who was not out on 18.

Leon Johnson, in his first Test in 20 months, was the only casualty for West Indies when an error in judgement saw him run out for 23.

The left-hander faced 75 balls and struck two fours and had added 59 for the first wicket with Brathwaite when he chanced a quick single to the right of KH Rahul at short mid-wicket, only to be beaten by a direct hit at the non-striker's end.

He perished on the stroke of the first hour after tea, but Bravo joined Brathwaite to ensure that there was no customary collapse by helping to post another 48 for the second wicket.

Brathwaite, with two failures in the last Test in Kingston, has so far faced 143 deliveries and struck six fours, while the left-handed Bravo has consumed 66 deliveries and counted two fours.

The 23-year-old Brathwaite, obdurate and heavily defensive for most of his innings, gathered his second half-century of the series in the day's final over when he slashed pacer Ishant Sharma over point for four and then followed up with a steer over slips to the third-man boundary.

Earlier, Ashwin carved out his fourth Test century against West Indies and the second of the series, while Saha gathered his maiden hundred, to extend India's resurgence and further frustrate West Indies.

Together, they posted 213 for the sixth wicket - resetting a 33-year-old record - before they were eventually separated.

Ashwin survived the third chance of his innings about 25 minutes before lunch when he was put down on 92 by Johnson at forward short leg off a sharp chance off off-spinner Roston Chase (2-70).

He raised his landmark in the second over after lunch when he hoisted Chase over mid-wicket for six.

India were in complete control at 339 for five when Cummins (3-54) returned to wreck the innings, as the visitors lost their last five wickets for just 14 runs. Three wickets then tumbled, with the score on 353.

B Kumar c Johnson b Gabriel 0

Mohammed Shami not out 0

I Sharma c Johnson b Cummins 0

K Brathwaite not out 53