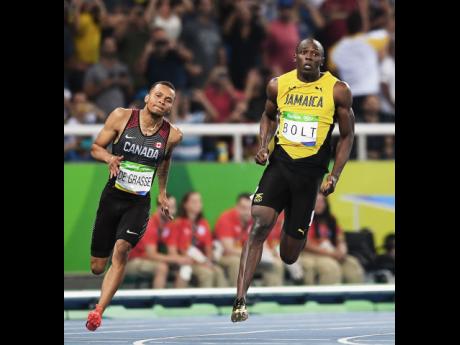 Ricardo Makyn
Jamaica’s Usain Bolt (right) runs alongside Canada’s Andre de Grasse as they come off the corner in the men’s 200 metres semi-final at the Olympic stadium at the Rio Olympics last night. Bolt won in 19.78 seconds, with de Grasse second in 19.80.

Usain Bolt is just over 80 strides away from taking another step into history and he has promised that it won't last too long this time.

Bolt eased to 19.78 seconds in his 200m semi-final win last night at the Rio 2016 Olympic Games, shooting off the curve and looking around with about 70m to go before young Canadian Andre de Grasse, 19.80, with a national record in sight, charged late, annoying Bolt into exerting more energy than he wanted to.

"I wanted to run slower, but de Grasse had other ideas, I saw that he ran a national record so he wanted to run fast, he means business," Bolt said.

Bolt's time was the second fastest time in an Olympic men's 200m semi-final, but it will be remembered as pedestrian if the big Jamaican has his way tonight.

Bolt has promised to release the hand brake tonight in what will be his last individual race at the Olympic Games - the target, 19.19 seconds, the seemingly untouchable world record that he himself set seven years ago now.

"I feel great," Bolt added. "This run showed me that I'm on the right track. I felt energetic and everything felt smooth, so hopefully I get the top lane, which is always better for me because I'm taller.

"I definitely think I can try after the world record. I certainly believe so, but I know I have to execute right, run the corner well and just run a perfect race," Bolt said, before underlining that he is well aware that he still has to run the race before he wins it.

"I don't get overconfident. I know I still have to come out here and run, so I'm focused on getting it done," he said.

Not getting it done this time were a number of big names, among them Jamaicans Yohan Blake and Nickel Ashmeade, who ran 20.37 and 20.31, respectively, and American champion and World Championships silver medallist, Justin Gatlin, 20.13, who all finished outside of the qualifying spots.

The challenge then will come from de Grasse - the 100m bronze medal winner and 400m bronze medallist LaShawn Merritt (USA), whose 19.94 was bettered only by Bolt and de Grasse's times heading into the final.

Merritt also comes into the Olympics having gone as fast as 19.74 this season, in an event he admitted he is still learning.

"I am by no means a 200m expert or anything, but I'm confident and positive going into the final. It was surprising that Justin (Gatlin) didn't make it through, so I guess I will have to wave the flag in the final," Merritt said.

A win for Bolt tonight will make him only the third athlete in Olympic history to win three Olympic gold medals in two individual events after US swimmer Michael Phelps, who won 100m butterfly and 200m individual medley gold at the 2004, 2008 and 2012 Olympics and American athlete Ray Ewry, who won the standing long jump and the standing high jump, from 1900 to 1908.