Blake ready to take over from Bolt 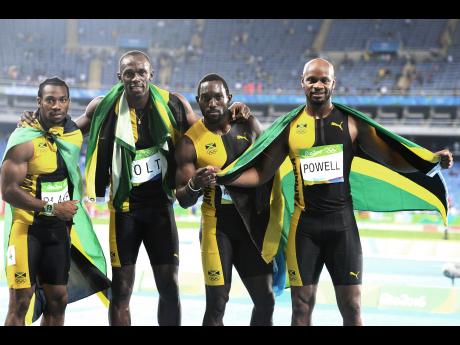 x
Members of the Jamaican quartet which copped gold in the 4x100 metres at the Rio de Janeiro Olympics last Friday night. They are (from left) Yohan Blake, Usain Bolt, Nickel Ashmeade and Asafa Powell.

Jamaican Yohan Blake says he is ready to assume the mantle from Usain Bolt, after the sprint sensation wrapped up an outstanding Olympic career with his ninth career gold medal here Friday night.

The 30-year-old Bolt anchored the men's sprint relay team to victory in the final in 37.27 seconds to secure his third gold medal of the Rio Games following his triumphs in the 100 and 200 metres.

And with Bolt having indicated he would call time on his Olympic career following the showpiece here, Blake believes he can be the one to step up and fill the void.

"I've learned a lot (from him) because he encourages me every day in training to be patient," Blake said.

"[He's always saying], 'Wait until it's your time' and I know my time is going to come so I'm going to take over from now."

Blake won silver in the 100m and 200m behind training partner Bolt at the London 2012 Olympics, but injury subsequently ravaged his career, causing him to go off the boil.

He missed last year's World Championships, but rebounded to qualify for the Olympics, where he narrowly missed out on a medal in the 100 metres when he finished fourth.

In the 200 metres, he failed to advance from the semi-finals.

However, he ran the second leg in the sprint relay and said the experience had been a great one.

"It has been a good feeling working as a team. The chemistry has been good ... we've gelled together. It was amazing."

Despite Bolt's utterances about Olympic retirement, Blake said he believed the World record-holder had another Games in him.

"It's a great feeling running with him, training with him. He's going to be missed," he said. "But I'm telling you a secret: I'm going to encourage him to come back for 2020 and he will listen to me."

the opening leg of the relay,

said he was thrilled by Bolt's accomplishments.

"It's a great feeling. I came out here tonight, got a gold medal, but definitely it's Usain's night," he said.

"This is his third gold medal at this Olympic Games, adding to his collection. He has so many gold medals right now, I can't even count. I'm happy for him."

Jamaica were never seriously challenged in the event, as they got the baton around smoothly to finish ahead of Japan and Canada - who were upgraded to bronze following the disqualification of the United States.

Nickel Ashmeade, who ran the third leg and handed over to Bolt, said the team had been relaxed about the event.

"There was no pressure at all. We had a good warm-up, we had a good chemistry in the background so we came out here with confidence just to try to win and take the record," he stressed.

"We didn't get the record, but we're happy with the win and be a part of history also."