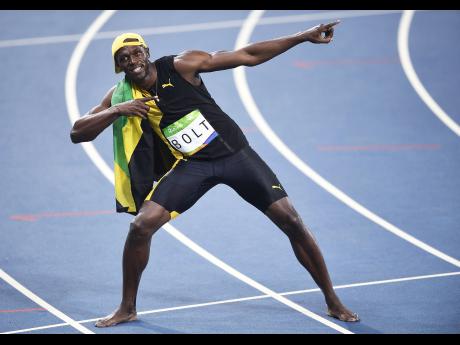 AP
Usain Bolt does his 'To the World' pose after winning the men's 100m final in Rio de Janeiro, Brazil.

Moments after Usain Bolt crossed the finish line to win a record third straight 100 metres Olympic title in Rio de Janeiro, Brazil on Sunday, August 14, thus cementing his legendary status in world athletics, scores of people from his boyhood community of Sherwood Content in Trelawny began calls for a statue of their hero to be erected in his hometown instead of the proposed Falmouth site.

Bolt rewrote the record books, when he stormed to his triple-triple of 100m, 200m and 4x100m titles at the Olympic Games, becoming the first in history to win all three in consecutive Olympics.

The residents, embolden by Bolt's historic achievement then made it clear to The Gleaner that they will not sit idly by and watch the erection of a statue of their hero outside the community. Plans have already been made to be erect a statue of the track legend at the Falmouth Cruise Ship Pier.

"That plan will not work; we are adamant that we will not allow that. Bolt belongs first and foremost to the people of Sherwood Content. We watched him as a little boy run on our streets and became world champion as a grown man," stated Owen 'Foot' Barrett.

"Bolt was not born in Falmouth. His navel string was cut right here in the lands of Sherwood Content," reasoned Barrett.

In 2013, Falmouth Mayor Garth Wilkinson said a statue of the iconic Jamaican would be erected in Water Square, Falmouth in December of that year. The idea, according to Mayor Wilkinson, was to have the statue as the main tourist attraction in the parish capital.

A new plan subsequently emerged which detailed the erection of a Bolt statue inside the Pier, much to the chagrin of the residents of Sherwood Content.

"What sense would it make to place Bolt's statue inside the Pier?" asked another resident, Ainsley Pottinger.

"That would serve as motivation for our young children to have that great man's statue to look at and draw inspiration from it if it is placed here in Sherwood Content," said another, Oneil Case.

They point to another legendary Jamaican figure, Bob Marley, whose boyhood house in Nine Miles, St Ann now serves as a museum, pulling hundreds of tourists and an effective means of economic activity for the locals.

"That is what we are demanding for Sherwood Content. Usain Bolt is a Jamaican of rare genius, born right here. It is only fair that we the people share in his legacy. The Member of Parliament, the Mayor, and the government must stand with us, as we will not relent," said a strident Barrett in defence of his stance.