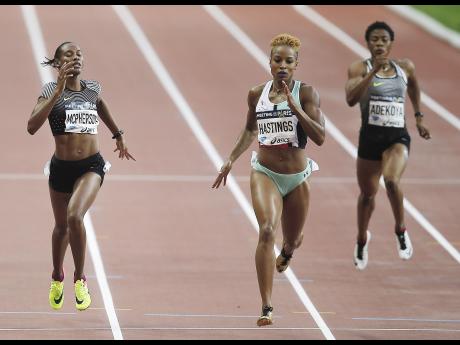 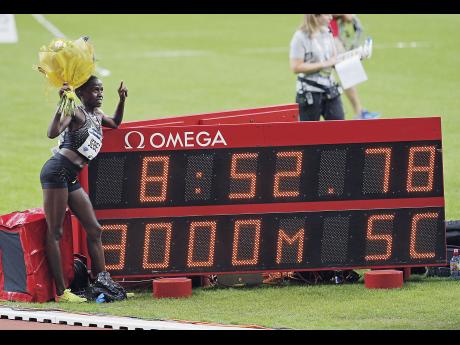 AP
Ruth Jebet of Bahrain poses next to the board showing her result after she set a new world record in the women’s 3,000-metre steeplechase event at the IAAF Diamond League athletics meeting in Paris, France, yesterday.
1
2

It was a hot and humid evening yesterday at the 12th stop of the Diamond League series inside the Stade de France Stadium in Paris, but there were still a number of outstanding performances on the track.

Jamaica’s Stephenie Ann McPherson and Christine Day had top-three finishes in the 400 metres hurdles while there was a world record in the women’s 3,000 metres steeplechase for Bahrain’s Olympic champion Ruth Jebet.

McPherson, a 400m finalist in Rio de Janeiro, was the best Jamaican on the day, finishing second in the one-lap event in 50.33 seconds behind American Natasha Hastings, who won in 50.06. Day showed marked improvement on her Olympic Games form to finish third in 50.75.

Starting out of lane five, McPherson was out the blocks the quickest and went past Day and opened up a slight lead on Hastings. The American improved mid-race and came off the final curve level with McPherson.

They had a keen duel for the final 80m before Hastings edged away in the final 10m for the win. In finishing second, McPherson, 31 points, took a one-point lead for the 400m Diamond Trophy ahead of Olympic champion Shaunae Miller of the Bahamas. Hastings was third on 28.

Day was satisfied with her performance.

“Today was a good day for me as I felt like myself again. I am not surprised because I know that I am in good form although I still have some little things to fix. I just don’t what went wrong in Rio and I am just looking to continue improving and end my season on a high,” Day said.

Simone Facey clocked 22.70 seconds for fourth in the women’s 200 metres. Dafne Schippers of the Netherlands won in a very good 22.13 seconds to widen her lead for the 200m Diamond Trophy. She is now on 36 points, 24 ahead of Facey. Great Britain’s Desiree Henry finished second in a personal best 22.46 with American Jenna Prandini third in 22.48.

Great Britain’s Laura Muir made it a big night for middledistance running as she won the women’s 1,500m in 3:55.22, a world-leading, national and meet record. Olympic champion Faith Kipyegon of Kenya had to settle for second in 3:56.72, with Sifan Hassan of the Netherlands taking third in a season’s best 3:57.13.

American Kendra Harrison remained unbeaten in Diamond League 100 metres hurdles as, fresh off her Lausanne win on Thursday, she won the event in 12.44 seconds to move to 50 points. Her countrywoman Dawn Harper-Nelson, was second in a season’s best 12.65, just edging out Cindy Ofili of Britain, 12.66, for third.

After his second-place finishes in Rio and Lausanne, pole vaulter Renaud Lavillenie, cheered on by his home fans, captured the event after clearing the bar at 5.93m. He turned the tables on American Sam Kendricks, who defeated him two days earlier in Lausanne. Kendricks was second with a best of 5.81m while Jan Kudlicka of the Czech Republic was third with 5.71m.