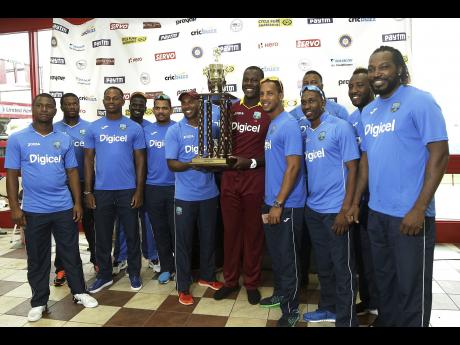 AP
West Indies’ Carlos Brathwaite (centre) and his teammates pose with the trophy after winning the two-match Twenty20 international cricket series 1-0 against India, yesterday in Lauderhill, Florida. Play was called off due to rain yesterday afternoon. 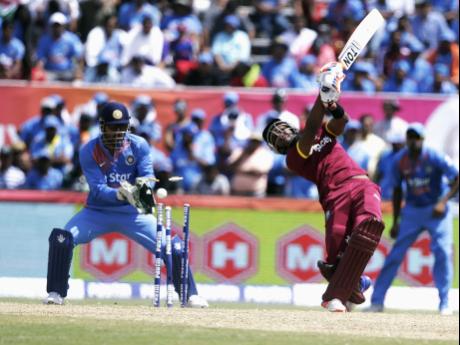 West Indies claimed a series win against India in bizarre circumstances after the second of their two T20 international matches ended in a no-result at the Central Broward Regional Park stadium here yesterday.

Umpires called off the match around 2 p.m. eastern Caribbean time (1 p.m. Jamaica time) after a delay caused by rain and concerns about soggy areas at the top of the bowler's runner-up.

India were two overs into the chase, at 15 without loss, after bowling out West Indies for 143 in 19.4 overs, in a match which also started nearly an hour late because of "technical reasons".

Opener Johnson Charles was the top scorer for West Indies with a steady knock of 43, in a dull innings, which saw cameos of 19 from Lendl Simmons and 18 from captain Carlos Brathwaite.

Leg-spinner Amit Mishra, who came in as a replacement for Stuart Binny, was the star of the Indian bowling attack, claiming three wickets for 24 runs.

West Indies won the two-match series one-nil after their narrow one-run win in the opening fixture on Saturday.

The lengthy delay in starting the game appeared to be as a result of technical glitches relating to the broadcast feed.

Sources have linked the technical failure to the inability of the broadcasters to receive the proper satellite link, resulting in the global delay of the broadcast, and ultimately, a delay in the start of the game.

The prospects of an outcome to the game were significantly reduced when the rain came for about 20 minutes from around 12:40 p.m. Eastern Caribbean time (11:40 a.m. Jamaica time). with India seemingly en route to victory after containing the West Indians.

Shortly after the rain subsided, the wicket was ready for play, as well as parts of the outfield, which had drained well.

However, the captains were concerned about particular areas at the top of the bowler's run-up that did not dry up, and the game was soon called off.

RG Sharma not out 10

AM Rahane not out 4