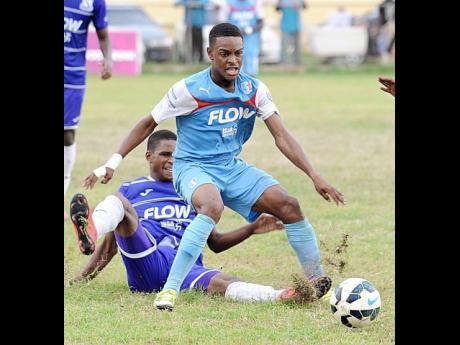 St George's College Manning Cup star Alex Marshall, who recently spent six weeks with German club St Pauli, described his trail stint as a 'wonderful experience', and the exciting young attacker thought he made a good impression at the second division outfit, but would not reveal if he would be returning in the future.

"I think it was a great trip and a wonderful experience," he told The Gleaner following St George's College's 1-2 loss to Kingston College in Saturday's Roper Cup match between the Manning Cup teams at Emmet Park, St George's College.

"Being the only Jamaican there, with no friend or family, I still went out and tried to showcase my talent," he said.

"I got first-hand experience to see what professional life is like. The coach there says I have a good eye for football and that I can be the guy to make the pass. He says that I fight for the ball and move into space well, so, hopefully, next time it will be much better," he added.

When quizzed on the possibility of him returning for another stint with the club in the future, his only response was, "I am working on my physical attributes."

Last year, the predominantly left-footed footballer's season ended disappointingly after St George's finished with just one of four trophies up for grabs.

Despite some observers saying they are not as strong this season, with the departure of Shevon Stewart and Gregory Messam Jnr, Marshall believes they will be challenging for all titles. He also acknowledges that more responsibility will be on his shoulder, but he is ready for the task.

"This Manning Cup season, I am looking to compete for every trophy as last year, playing our type of football and trusting in God. I know I will have to work harder than everyone else. I know that for sure, so I hope everything goes well.

"But it's a team sport, so I alone cannot do it, but I will play my best with my teammates and, hopefully, we'll come out victorious," he said.