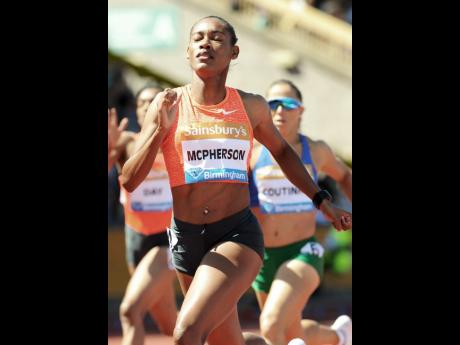 Jamaica's Stephenie Ann McPherson, who has a chance of winning the Diamond League trophy for the women's 400 metres, is looking to switch events and compete in the 400 metres hurdles next season.

Currently, she is the new leader of the 400m race in the Diamond League Series, after finishing second on Saturday at the meeting in Paris. She clocked 50.33 seconds to finish behind the United States' Natasha Hastings, who clocked 50.06 seconds.

By virtue of her second-place finish, the Jamaican earned enough points to take a narrow lead going into the final leg in Brussels, where the points earned will be doubled. McPherson now has 31 points, just one ahead of Olympic champion Shaunae Miller of the Bahamas, on 30, with Hastings, a further two points behind on 28, in third spot.

Miller was absent on Saturday in Paris and McPherson, who finished sixth in the event in Rio, is optimistic heading to Belgium.

"For me, it was an okay race as I just did what I had to do. It is not the first time I am in this position in the Diamond League, and going to Brussels, I am confident as I know I can do it once I execute well," she said.

Commenting on how her season has gone, she said: "It was not what I expected and maybe I will try the 400 metres hurdles next year, but I will have to wait and see what my coach, Stephen Francis, will do."

McPherson left Paris yesterday, heading back to Italy to the training base for the MVP Track Club athletes.