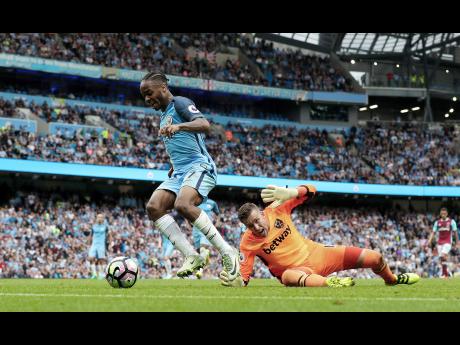 However, what started as a lesson in pass-and-move, attacking football by City under new coach Pep Guardiola turned into a nervy finish at the Etihad Stadium.

Raheem Sterling and Fernandinho scored in the opening 18 minutes for City, which carved West Ham open at will in a dominant first-half display that showed Guardiola's influence is already rubbing off on his players.

Injury-hit West Ham improved in the second half and Michail Antonio's 58th-minute header made City work for their win, which was sealed by another goal by Sterling in injury time when he rounded the goalkeeper and scored from a narrow angle.

At least one perfect record will go when United play City at Old Trafford in the first round of games after the international break.

It's early days, but it could well be a shoot-out for the title between the three teams already at the top of the standings. City currently are ahead of United and Chelsea on goal difference and Guardiola said there's plenty more to come.

"Of course, there is still room for improvement," Guardiola said, "but we have been playing well and hopefully we can continue doing that.

"We have to make an amazing performance to win at Old Trafford. I can imagine the atmosphere. I am looking forward to live that experience."

Arguably, Guardiola's biggest achievement in his first few months at Etihad Stadium is getting the best out of Sterling, the Jamaica-born winger who lost his place in the team at the end of last season his first at City and then had a poor European Championship campaign with England.

Now, he is showing the kind of form that persuaded City to spend £49 million (then $76 million) to sign him from Liverpool last year. Creating more space for him to run at defenders seems to be the key difference in Sterling this season.

"We try to help him to say, 'If you stay in that position, you receive the ball quicker'," Guardiola said. "After, when he receives the ball, it is completely his talent. Man City bought this player because they believe."

City have won all five of their competitive matches under Guardiola, including two victories over Steaua Bucharest in Champions League qualifying.

In the other game yesterday, Middlesbrough maintained their unbeaten start to life back in the Premier League by drawing 0-0 at West Bromwich Albion in a game of few clear-cut chances.