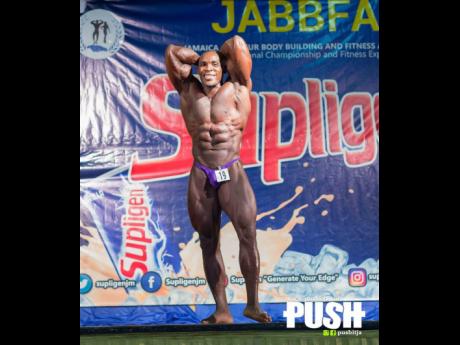 Following a four-year break, many-time Jamaica Amateur Bodybuilding and Fitness Association (JABBFA) national champion, Rupert Johnson, has returned to the sport to prove he is more than a competitor, but a defender of the sport he loves.

Johnson won the men's overall bodybuilding title at last Saturday's Supligen National Championships and Fitness Expo, and he revealed that he returned to prove he is the best locally.

"I have been entering bodybuilding competitions from there were just five persons on stage. I love this sport, and bodybuilding is my life," he shared in an interview with The Gleaner.

Johnson said winning the overall title last Saturday gave him a 'great feeling' after being away for so long.

"I am happy to share that love I have for the sport with the people," Johnson said. Ironically, the veteran last won this competition in 2012, when Supligen first began its sponsorship.

"The sport is growing tremendously, and as a veteran, I am happy to be an inspiration and role model for the youngsters coming up in the sport," Johnson underlined.

The 46-year-old said that although he had been away from competition, he has always maintained his fitness.

"I think a lot of guys need a role model in this sport. I am determined to look good and put on a show for all. I am always in good condition. Bodybuilding is a lifestyle for me," he pointed out.

Next for Johnson is a trip to the Dominican Republic in September to compete in the Central American and Caribbean Bodybuilding Championships.