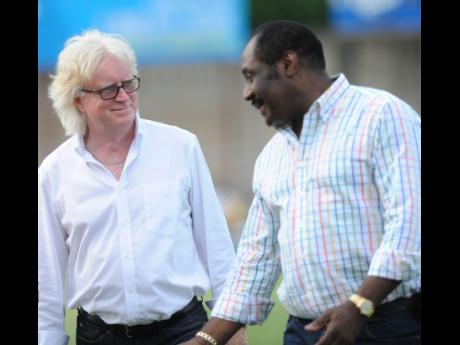 With Jamaica's senior men's national football team, the Reggae Boyz, eliminated from Russia 2018 World Cup qualification - even with a game in hand tomorrow against Haiti - there is anticipation that as customary, the head coach in charge of the programme, who in this case happens to be Winfried Schaefer, will be axed.

President of the Jamaica Football Federation (JFF), Captain Horace Burrell, has expressed displeasure at the Reggae Boyz exit in the semi-final round of CONCACAF qualifiers and noted that the football organisation's technical committee will meet soon to make some decisions.

He refused to say exactly what those decisions would likely be, but noted "there will be consequences".

The team plays Haiti in its last 2018 World Cup Qualifier at the National Stadium tomorrow, having already been ousted after losing 0-2 to Panama at Panama City last Friday night.

"Very, very, very disappointed; indeed," Burrell told The Gleaner yesterday afternoon. "In fact, given the talent pool, there's no way we should not have reached the last six, and that disturbs me and our football federation.

"What we're saying here is it cannot be business as usual, it cannot be," said Burrell sternly. "When performances like we have seen have gone the way that we've seen around the world, there are consequences, and therefore we're in no different position than in other countries and therefore very soon, we will await the report from the technical committee and then we'll move on from there."

Asked for details, he said: "I'm not going to be specific at this time because there are legal ramifications as well. But my point is, we should have done better with the quality at our disposal. If we did not have the quality, then that'd be a different matter."

Schaefer, on the other hand, is contracted to the JFF until 2018 and said in spite of the team's elimination, he is focused on fulfilling his contract.

"We can talk, but we have to do it. We need training centre of excellence, we need all services the players need for good football and we can do it, because we have highly motivated coaches and me," he continued.

"If we live in the past, we have no chance for the future, so we have to change after tomorrow's game. We want to, give supporters three points. Sorry for not qualifying for the final round. This (Panama) match was important, but it was not the key; the key was the two matches here, Panama and Costa Rica, and the goals in those matches were mistakes. It's finished now, we can talk about yesterday, but that's gone, we have to build a new team," said Schaefer.

From a financial perspective, Burrell pointed out that they invested heavily and stand to lose a lot by not advancing to the CONCACAF Finals (Hexagonal), where the top six teams play-off on a round-robin basis and the top three automatically advance to the World Cup, while the fourth gets a shot through a play-off against the Oceania champion.

"This has been a very expensive programme. The JFF has given it everything that we were able to, and having done that and not seeing the results, then we have to move to phase two," said Burrell.

"You can't quantify it as losses ... . Going forward, a lot of the resources that we were expecting, we will not be in a position to access those, and so that is where we would have lost out. When you look at bonuses for qualifying and moving to the next stage, those things are no longer going to be available to us, so it's lost opportunities," he explained.

Jamaica's senior Reggae Boyz qualified for the World Cup once, in 1998, with a core of local-based players. The trend has since shifted, with players of Jamaican lineage who were born overseas given the nod.

Asked if the JFF would look to revisit its once-successful strategy, Burrell said: "There has to be a total review, and this is why I say a number of things have gone wrong, because you've a head coach who was employed to do a job and his job would have been to evaluate locals, assist in whatever way, put them together with the foreigners, and have the thing work. Has that worked? I personally don't know."

He continued: "When you give a programme to a person, you hand it to them and say, deal with this. If it is unsuccessful, you must determine the reasons, and at the end of the day whoever is responsible must be held accountable. That is football."