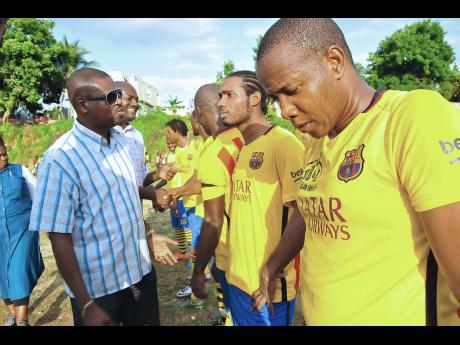 The Institute of Sports (INSPORTS) is thrust to develop football at the community level scored another goal with the St James Community Development Football League in Mount Salem on Saturday.

Piggott Street and Telloville beat away the challengers of all comers and made it to the grand final, where Telloville registered a 3-1 win. Jay Jourdain, Marvin Sangster and Rushane Reid secured the win for Telloville, while Jelani Nicholson was the lone scorer for Piggott Street.

Piggott Street copped the second Place prize of $100,000 and Palm Scheme earned $75,000 for finishing third. Evrold Jenkins was honoured as outstanding referee for the league.

The league extended over a three-month period and was part of the state agency's community football development programme, which focuses on exercises geared towards improving the fundamentals of the game at the grass-roots level.

A 360-degree approach is taken, integrating technical and, tactical skills and fostering positive attitudes and discipline of the programme's participants.

This is in keeping with INSPORTS's mandate to increase opportunities for talented players at the grass-roots level to improve their technique and level of expertise. This, in turn, will result in the creation of a larger pool of players who are better prepared to make the transition to the national level.

"Today's match was a display of the talent and dedication of the players and the coaches participating in the programme. We saw where keen attention has been paid to the fundamentals of the game, particularly in ball control, marking and tackling," noted Ian Andrews, administrative director of INSPORTS.

He added: "The camaraderie among the players was also inspiring to see. The players have come a long way, and INSPORTS is pleased to be the driving force behind these efforts."

Equipment, uniforms and gear are also supplied as part of the programmes spearheaded by the state agency.

The INSPORTS Football Community Development League will continue to expand across the island, with coaching clinics, intermediary competitions and playing field rehabilitation exercises currently under way.

The Coaching Clinic programme is set to be implemented at the primary school level islandwide.