Wrestling to be introduced at GC Foster College 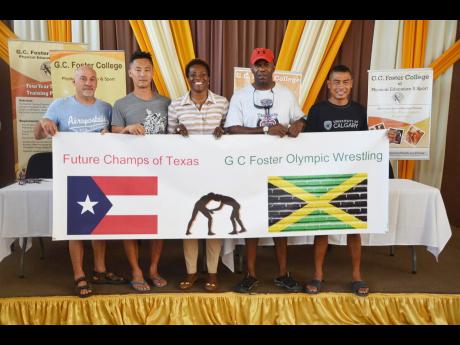 Contributed
Principal of G.C. Foster College of Physical Education and Sport in St Catherine Dr Joyce Graham-Royal (centre) shares a photo opportunity with members of the Future Champs of Texas organisation, who staged a five-day wrestling workshop at the institution from August 22-26. They are (from left) Michael Campitelli, Robert Zee, Rick Henry and John Cho.

The G.C. Foster College of Physical Education and Sport, which has produced some of the country’s most outstanding athletes and coaches in various disciplines, is adding wrestling to its programme offerings.

“We have all the equipment that we need to ensure that this happens,” says principal of the St Catherine-based institution, Dr Joyce Graham-Royal.

“We have the personnel as well to ensure that a broadbased foundation is set for this course,” she added, noting that the introduction of wrestling at the college “will bring tremendous opportunity for students to be exposed to a new discipline”.

Graham-Royal pointed out that Jamaica is “filled with persons who are naturally quick and we naturally run fast, but we need to introduce other sports that we know we will do well in or that we know we can compete in at the Olympics. Wrestling is, in fact, an Olympic sport for both men and women.”

She says the objective is to train coaches, who would introduce the sport to children across the island, contending that if children are exposed early by the time they get to Olympic-level competition “they will be excellent”.

“That is where we want to take it, and the fact that it is linked to a tertiary institution makes it even better,” she said. “You can gain many skills that our nation needs at this time, such as body awareness, self-confidence, mental toughness, team spirit and tolerance.”

As part of preparations to introduce the sport, the college partnered with the Future Champs of Texas organisation and hosted a five-day wrestling workshop, from August 22-26.

It attracted more than 50 students from primary, secondary and tertiary institutions, community members and persons interested in becoming instructors. Participants were exposed to the areas of coaching and competition and engaged in the sport as a fun activity.

“We have engaged members of the community. Our school is in the middle of four communities that need a lot of support and so young men and small children have been involved in the process. In fact, they are very excited about it... because they want it to continue,” said Graham-Royal, who also informed that the institution has a memorandum of understanding with Future Champs to conduct more workshops.

Jamaican-born wrestling instructor Ricky Henry, who was part of the team, said the participants were very responsive to the training.

“We talked about the strengthening and positioning of the whole body from the neck to your toes, and what to eat before and after practice. We talked about warm-ups, how to warm the body and cool down after practice to bring your heart rate down. It is very important. We spoke about the history of wrestling,” he divulged, noting that some of the participants want to become competitive wrestlers.