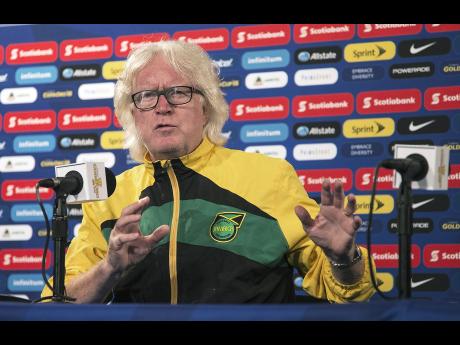 When Jamaica's Reggae Boyz take to the National Stadium playing field tonight to face Haiti, it will be a game of academic interest after the Jamaicans were embarrassingly, but predictably eliminated at the semi-final round from the Russia 2018 World Cup-qualifying campaign in Panama City on Friday night.

It has been a wretched campaign, piloted by German coach Winfried Schäfer, who has appeared totally clueless along this journey. He has been inept and incompetent in managing the nuances of the campaign, exhibiting a glaring inability to reconcile the relatively less important assignments such as the CONCACAF Gold Cup, the Copa America tournament and other meaningless friendly internationals with the vital importance of the World Cup-qualifying campaign.

The coach has failed to grasp the fundamental fact that the World Cup qualifiers should have been the top priority and not the Gold Cup performances, or beating Chile in a warm-up game, or even performing creditably against the South American giants at the Copa.

Schäfer's naivety as a football manager was exposed from as early as the first game of the current campaign, when on the heels of the Gold Cup high when the Boyz went all the way to the final, the team got humbled and humiliated inside the National Stadium by lowly Nicaragua, a glaring index of the coach's misplaced priorities.

The campaign never recovered from that bumpy start. The Boyz have played three home games so far during this campaign. They lost two, drew one and conceded six goals and scored four.

They failed to keep a single clean sheet in those home fixtures, amassing a mere one point from a maximum possible nine. With that kind of home record, the writing was always on the wall.

The record on the road was no game changer either, as they played four games, lost two and won two, scoring two goals, while conceding five.

That is an overall five goals scored against 11 conceded, the perfect recipe for a ruined and embarrassing World Cup campaign.

This team was never in with a realistic chance of advancing to the final round under Schäfer's guidance.

Not only has Schäfer failed miserably in his management of this crucial process, but his team selection and his tactical and technical manoeuvring of the team has looked consistently like guesswork.

Schäfer's presence through the World Cup-qualifying campaign is akin to a Category Five hurricane in full flight, destroying and flattening the nation's football.

The Captain Horace Burrell-led Jamaica Football Federation (JFF) administration cannot escape a substantial share of the blame, especially after news emerged that the JFF signed a contract with Sch‰fer that renders them impotent in terms of firing the coach - despite his failures - without incurring a massive financial fallout.

The continued practice of marginalising and disrespecting the local player pool in exchange for chasing after mostly mediocre lower-league foreign-based players of questionable quality and commitment to Jamaica, is a philosophy spearheaded by the Burrell administration and merely exacerbated by Schäfer, a philosophy that has again failed miserably, as indexed by the lame, pathetic and gutless performances of most of these foreign-born players during this campaign.

Jamaica's football is at the end of another cycle and is crying out for new thinking. That thinking must include value and development of the local player pool.

Captain Burrell is still the best and most successful JFF president to date, just as Usain Bolt is the greatest sprinter the world has ever seen.

Bolt has set a timetable for his departure. All things considered, the Captain should take his cue from Bolt and make way for the NEW THINKING that the nation's football so desperately needs.