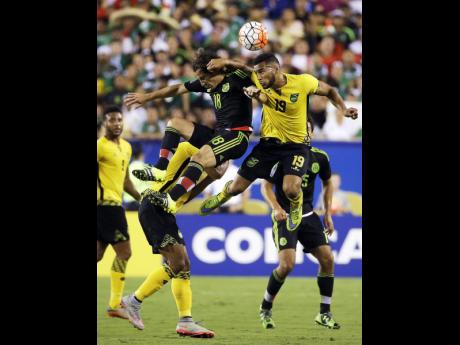 AP
Adrian Mariappa (foreground) challenges for the ball with Mexico’s Andres Guardado during the CONCACAF Gold Cup final last year. Mariappa says the Reggae Boyz will be going all out for victory against Haiti in tonight’s final 2018 World Cup qualifier at the National Stadium.

Under-fire head coach, Winfried  Schäfer hopes to end the campaign in some style with a consolation win as a gesture of goodwill to the home, when Jamaica's Reggae Boyz close off their 2018 World Cup-qualification campaign with their final CONCACAF Group B football game against Haiti at the National Stadium this evening, starting at 8.30 p.m.

"Sorry for not qualifying for the final round," he told The Gleaner after the team's training session at the National Stadium. "We want to give supporters three points in the last game. We want to win, and we want supporters go home and saying 'okay'," he said.

Jamaica's World Cup hopes ended following their 2-0 defeat in Panama to the host nation on Friday. The result leaves Jamaica second from bottom in the four-team group on four points, ahead of today's final fixtures. Costa Rica sit atop the standings with 13 points, followed by Panama with 10. Haiti are at the bottom with one point. Only the top two qualify.

Football pundits are calling for Sch äfer's sacking, but he remains defiant.

"We can't live in the past. We have chance for the future. We have to change. After tomorrow's game, we want new players on the bench. I want to see other players for the future," he said.

"We want to build a new team. We want a local national team. They will have to play football (regularly); maybe in the parishes in Hanover, Montego Bay, Clarendon. Our young talents here in Jamaica need matches and good training field to build a future team, and I want local national team plus players from overseas, not players from overseas with local players," he declared.

Meanwhile, defender Adrian Mariappa says the team is determined to finish the campaign with a win for the fans.

"Three points is the only way we can finish the campaign. We have to come on Tuesday and get a win. We know it's going to be a tough game, but I am sure Haiti is going to come here thinking the same thing, that they want to end on a win, so we need to prepare and get the win.

The Watford defender says a low fan turnout wouldn't surprise him either.

"... The fans are disappointed and angry, but there is no one disappointed as us. But for the fans that do come out, we appreciate that and we appreciate the support, not only over this campaign, but over the Gold Cup and the past few years. All we can do now is get a win and a good performance," said Mariappa.

Veteran midfielder, Jobi McAnuff, said the team is prepared to face the consequences of failure.

"At the end of the day, whatever job you are doing, you have to perform, and you have to deliver, and we haven't done that. In life, when you don't deliver, you have to stand up and take whatever comes your way. We are hurting that we didn't go through, and there is no one as disappointed as us. But we hope they (fans) can bear with us, stay with us, and continue to support us," he said.