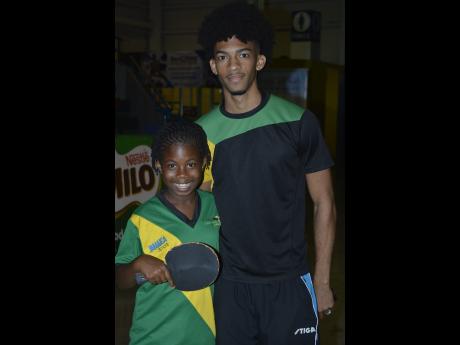 National table tennis champion Simon Tomlinson says the future could be bright for the youngsters who represented Jamaica at the recent Caribbean Pre-Cadet Championships in Kingston.

Tomlinson believes that competition, coaching and exposure will help them greatly. With these inputs in place, he expects them to surpass his own level of play soon.

Jamaica won just one title at the Championships, but for Tomlinson, the overall team performance was encouraging.

Lens Campbell and Kelsey Davidson finished first in the Under-11 girls' doubles. In addition, Davidson and the pair of Dujuan Jackson and Joel Butler took silver medals in the girls' Under-11 singles and the boys' Under-11 doubles, respectively.

"This is the first chance for that kind of exposure, so I think for the preparation that they had and for the level they're used to, they did very well," he explained.

Tomlinson thinks it would help if Campbell, Davidson and the rest of the Jamaican pre-cadet squad could stay together. According to the national champion, increased competition is a critical element.

"They have the school leagues that they play, but they need the club leagues as well," he noted.

"Give the kids a lot more chances to get exposure so that when they're called upon to compete at that level, they shouldn't have any problem."

His hopes are buoyed by the number of participants he sees at competitions for primary and preparatory school children.

Trinidad and Tobago dominated the tournament. The twin-islanders won all four of the team events, with the only singles title to escape them going to Kasan Ninvale of Guyana in the Under-13 boys' category.

Campbell and Davidson prevented a Trinidad and Tobago sweep in doubles competition.