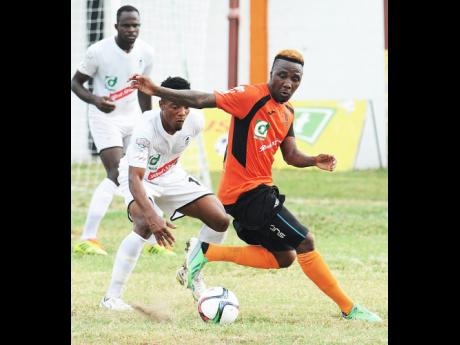 At one of the lowest times in the country's football, with the Reggae Boyz's World Cup dreams coming to an end and the Red Stripe Premier League getting off to a lukewarm start, veteran Jermaine 'Teddy' Johnson stood out like a floodlight in a sea of darkness in Tivoli Gardens FC's Premier League match against Harbour View.

So good was Johnson's performance that the game at the Harbour View Mini Stadium on Sunday night should have been televised.

The attacking player, operating in an unfamiliar striker's role, showed vision, pace, artistry and opportunism, all of which appear lacking from the national game at this time, as he created one goal and scored two to lift Tivoli Gardens to a 3-0 victory over Harbour View.

It was the biggest victory of the opening day, giving new Premier League coach Andrew Edwards a dream start in the 'big league'.

"The fans keep calling you an old man and so you don't even want to prove anything to them, you just want to go out there and play. And that is what I went out there today to do, to play my own game; and I felt like a young player," said the 36-year-old, who has had a number of spells with clubs in the United Kingdom and the United States, beginning with Bolton Wanderers in 2001.

The opportunity to assist in the development of the youngsters at the club, where he made his breakthrough, was another source of inspiration for the former Tivoli Gardens High School star.

"These youngsters that I am playing with, they want to play; so it is a motivation for me to go out there and help them. Just to show them a thing or two and help them and the team to improve means a lot to me," he added.

"I would love the call-up still, but it is one of those things. If they come for me I am ready," Johnson said laughingly.

Whether the national call comes or not, Johnson said he will keep playing and putting on a show.

"I am aiming to have a positive vibe this season and to go out there and play my best. I just want to keep playing and keep competing and continue to provide enjoyment for the people," Johnson concluded.