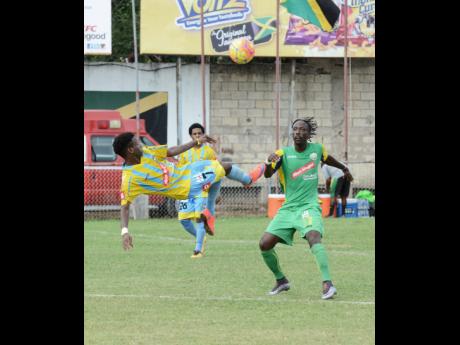 Newcomers Jamalco continued Waterhouse's miserable start to the Red Stripe Premier League (RSPL) season, handing the Drewsland-based club a 3-0 win at Waterhouse Stadium yesterday and condemning the former champions to their third defeat from as many games.

The 22-year-old attacking midfielder, Rohan Richards, was the chief architect of the home team's demise, providing a goal and an assist while tormenting the Waterhouse defence all afternoon.

The former Denbigh High player, who is in his first season in the Premier League, has won the Man of the Match award for all three matches he has played this season and is really taking to life in the top-flight.

"I have a good influence on the Jamalco attack. Jamalco fans are looking for hard work from me, so I put in the hard work for my team to come out victorious in games. This is my first year in the Premier League and I knew I could do it, from I put in the work and do what I have to do," He said.

"My ambition for the rest of the season is to keep focused and continue doing what I have been doing, because I have played three matches so far and I have got three man-of-the-match award, so I just want to keep doing what I am doing," the former G.C. Foster College player said afterwards.

The visitors were the better team from the opening whistle and they deservingly went ahead when Theo Brown's poor clearance, after Richards' penetrating run, gifted Roshane Sharpe a sitter. Sharpe slotted home from six yards.

Waterhouse continued to have problems containing Richards, and 63 minutes into the match, he slipped AndrÈ Dawson through on goal and the former Boys' Town man fired under Roshane Patterson to double the lead.

Four minutes from the end, Richards capped a fine individual performance when he ran through the Waterhouse defence before hitting a shot that struck the post and deflected into the net.

With two wins from three games, Jamalco's coach, Rayon Johnson, is pleased with his team's start to life in the top flight. He also had high praises for Richards.

"This start is good for us. Teams will get stronger as the competition goes on, so we have to accumulate points and look what comes further down the road. But I was really impressed with my team's performance," he said.

Johnson added: "Richards is a quality player He comes every day and works hard and once you work hard, you are going to get your reward, and that's what happened today. He's one of the key players in our system.

Meanwhile, as pressure continues to mount on Waterhouse coach Marvin Tate, he was locked in a meeting with his players after the game and unable to comment.