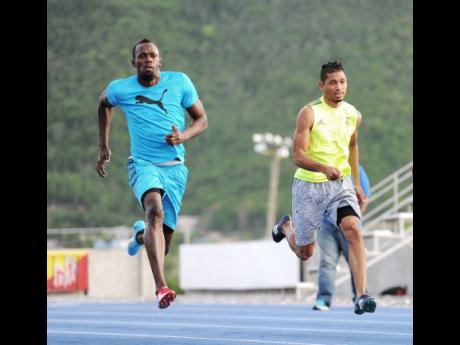 Wayde van Niekerk shocked the world with his record run of 43.03 seconds in the 400 metres at the Olympics. Now, the speedy South African has his eye on another record, the 200-metre standard held by Jamaican sprint great Usain Bolt

None other than Bolt himself says van Niekerk could possibly better his mark of 19.19 seconds.

"My dream is try to get where Usain Bolt is in 200m," Van Niekerk said in comments noted on the website of US television station NBC.

"He's a massive inspiration and motivation for me to improve myself because I know it is possible," said the 24-year-old South African.

Asked by Tim Leyden of Sports Illustrated whether van Niekerk could break his 200m world record, the Jamaican estimated: "If he can clean up his technique on the corner, maybe he can do it."

The South African's personal best for the 200 metres is 19.94 seconds. In fact, he was more of a sprinter before injuries forced him to move up to the 400 metres.

"I hate the 400m," he said to France's Le Figaro, who provided an English transcript of the interview to NBC. "I hate it because I know what it does to my body, but I love it for what it does for my life."

He collapsed after winning the World Championship 400m last year and had to be carried off the track.