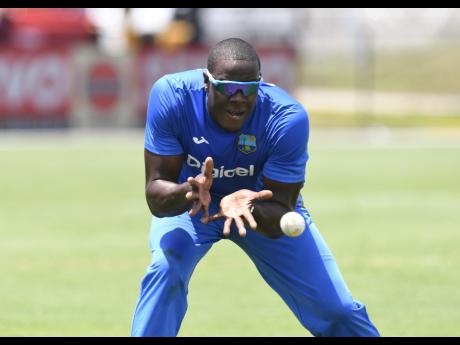 Reigning World champions West Indies find themselves in the unfamiliar position of battling to avoid a whitewash when they clash with Pakistan in the final Twenty20 International of the three-match series today.

Battered following two bruising defeats in the opening games in Dubai, West Indies will aim for a dramatic turnaround in order to extract some semblance of pride from what has otherwise been a humbling experience.

The side, which won an unprecedented second T20 World Cup last April in India, are yet to display that swagger and captain Carlos Brathwaite said now was a good a time as any for his unit to make their presence felt.

"Every game we play, we go out there to win. Psychologically, going into the longer format - the 50 overs - it would do us a hell of a lot of good to get a victory," Brathwaite said yesterday.

"We need to go out there and do the things we know how to do, do them better than we did in the first two games, and we're more than confident that we can come out with a win."

In both games so far, West Indies have suffered batting meltdowns. In the opening game last Friday, they were bundled out for 115 paving the way for Pakistan's uncomplicated nine-wicket victory.

And in the second game the following day, the Caribbean side botched their run chase in pursuit of 161, to go down by 16 runs.

"One glaring problem that I can see is the batting, especially the top order batting. We haven't been making the most of the first six overs with only the two fielders out and then it became harder and harder [as the innings progressed]," he explained.

"In the very first game, we had five wickets down ... and then chasing 160 [in the second game] and being only 20-odd in the first six overs, it's going to be a lot more difficult especially with such huge boundaries.

"So I think the top order batting and the misuse of the first six overs was our downfall in the first two games."

Brathwaite, in only his second series as captain after replacing the sacked two-time World Cup-winning skipper Darren Sammy, is also yet to fire.

He came to prominence following his heroics in the T20 World Cup final against England, but with scores of nought and eight, he is yet to weigh in with any performance of note.

After playing an unchanged team in the opening games with little change in the outcome, Brathwaite said selectors were contemplating using a few new faces for the final game set for the Sheikh Zayed Stadium.

All-rounder Rovman Powell and fast bowler Kesrick Williams are two uncapped players in the squad who could come in while Chadwick Walton and Test and one-day captain, Jason Holder, are also yet to play.