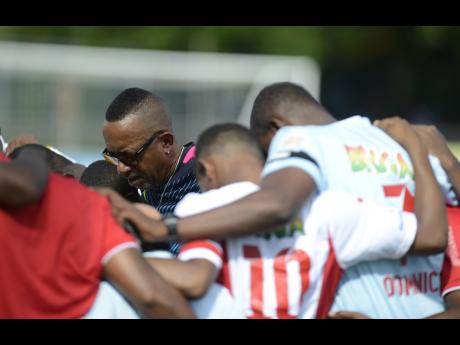 It is amazing that one so young could leave such an indelible mark.

The tears have not yet begun to dry after the death of Dominic Alessandro James, the unquestioned leader and captain of the St George's College (STGC) Manning Cup team. On September 20, mere minutes into STGC's match against Excelsior High, Dominic collapsed to the turf. Despite being rushed to hospital, it was to be the last time he featured on a football pitch. A promising footballer and bright young man had heard the final whistle. There is an archaic notion that boys aren't supposed to cry. But there was not a dry eye at the mini-stadium that afternoon as players and officials from both teams openly wept.

Since Dominic's passing, the same young men he led out into battle in light blue and white have been expressing their love for him. Their words, printed in two pages of the Sunday Gleaner of September 25, a day before Dominic's 19th birthday. The written expressions give real insight into the team, no, the family, of which Dominic was a major part; and perhaps he was its very core. In times of grief, words can prove insufficient to fully describe the emotions. But the team did its best to make sure the world knew how they truly felt.

Teammates described 'Delly Ranks', as Dominic was affectionately known, as a "role model", "a loving brother", "a motivator", and "a wonderful leader". In a day and age when young men are accused of shying away from their feelings, several members of the team openly expressed how they loved Dominic.

"You've been a great friend, brother, and leader. I love you and I miss you," wrote Damani Harris. Paul Young Jr echoed those sentiments when he penned, "Words cannot truly express how I feel about you. I will always love you, Dominic Alessandro." Others expressed admiration for how Dominic carried himself.

"I'm sorry I didn't get to tell you you're someone I admired a lot and I always wanted to be like you in terms of academics and your playing style. Love you, Dominic Alessandro James," shared Taffarel Hamilton. There were a few words of regret as well, as some wished for one more opportunity to see him face-to-face.

"I'm sorry I didn't get the chance to tell you how much I love you and that I'll do everything that I can just to see that angelic smile of yours. I'm elated to have met you and that we've had so much wonderful moments together," wrote Alex Marshall. Others tried to console themselves with the fact that Dominic was no longer in pain and that he was in a better place.

"Sometimes we all wonder why God takes the most beautiful souls, but do you ever notice when you pick a flower, you pick the most beautiful one? Well that's you," signed Jonathan and Matthew Wilson. It is clear that Dominic's spirit will remain with this team. The hashtag #WEDOITFORDELLY has become a rallying cry for STGC as they continue their search for schoolboy football glory. And the young men gave the assurance that Dominic would never be forgotten. D'Andro Segre said, "His kind-hearted spirit will surely be missed and never forgotten," while Romario Harding probably summed it up best:

"Your spirit will always be with us. We never say DIE!! WIN, LOSE, OR DRAW!"